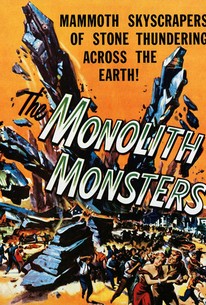 While studying meteor showers in the American Southwest, geologist Dave Miller (Grant Williams) finds some rather queer crystals. The crystals grow huge after a rainstorm, and begin absorbing silicone from humans, turning them into monsters. Miller tries to save the small town, whose residents include a schoolteacher (Lola Albright) and her children.

Critic Reviews for The Monolith Monsters

Probably one of the most misleading movie titles in film history . . .

Audience Reviews for The Monolith Monsters

This has to be one of the oddest concepts to ever hit the silver screen. As a fan of alien invasion films, I've grown accustomed to having my space invaders with bulging eyes, spindle-like tentacles and nasty dispositions. Not so with The Monolith Monsters. Here, the threat comes in the form of dark crystals that grow large, topple over, and grow large again. Compared to other sci-fi offerings of the same era, this one's a little lame. There's not much to frighten or shock you here. These aren't creatures with malice of forethought. They are not sent here to destroy us, or even save us. They are rocks that will crush you if you're foolish enough to be anywhere near them when they fall over. I have to give Hollywood a measured amount of credit for at least attempting to give us something unique and unusual, even if it comes up a little short.

attack of the giant crystals! heroic geologists, your time has come! interesting idea and not a bad film for a rainy sunday afternoon

Simply boring ..watching giant black rocks grow to the size of skyscrapers might turn on a geologist, but does little for me. Typical 50s effort; I simply prefer the aliens or flying saucers.