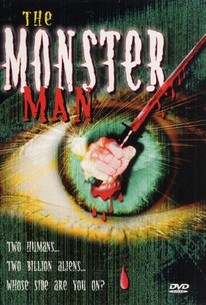 The year is 2210, and a deadly, alien-manufactured plague has decimated mankind, leaving the survival of the human race in the hands of a futuristic Adam and Eve named Jake and Katherine. As the aliens descend to stake their claim upon Earth, gluttonous extraterrestrial leader Lord Gideon is enraged at the discovery of the two human survivors. As Lord Gideon sends his ham-fisted minions on a mission to ensure the death of mankind once and for all, Jake and Katherine must defeat an army of cross-eyed aliens before getting on with the demanding task of repopulating an entire planet.

Critic Reviews for The Monster Man

Before you (finally) get to the end of the road, there are a few guffaw-inducing grisly deaths and gruesome gross-out scenes shoehorned into painfully forced comedy.

There are no featured reviews for The Monster Man at this time.