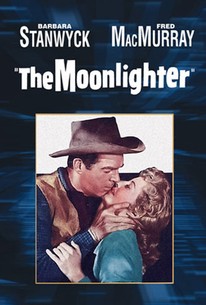 Fred MacMurray teams up again with his Double Indemnity co-star Barbara Stanwyck to dull results in this pokey western that was originally shown in 3-D. MacMurray is a villain currently doing time for "moonlighting," meaning that he is a legitimate cowhand by day and a low-down rustler at night. Slippery MacMurray manages to bust out of jail before the lynchers come. In their fury for vengeance, the mob hangs the wrong man. MacMurray is outraged and secretly pays for the hanged man's funeral. He then gets vengeance upon the unjust townsfolk. Later, he beings robbing banks, his girl friend Stanwyck is assigned to capture him. She succeeds and he willingly returns to jail, sure that she will await his release.

Critic Reviews for The Moonlighter

I cannot imagine why Warners put two top stars into such a production, or why the earnest Miss Stanwyck, even for art's sake, should love MacMurray's unshaven dolt.

A muddled Western, set in the early part of the 20th century, shot unnecessarily in 3-D and in Black-and-White, that's indifferently helmed by Roy Rowland.

Audience Reviews for The Moonlighter

A great leading lady in a mediocre western that she's too good for.