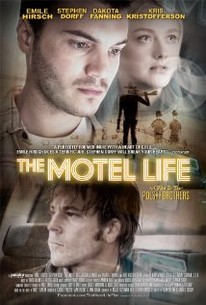 Critics Consensus: The Motel Life transcends its frustratingly uneven screenplay with some outstanding work from a talented cast.

Critics Consensus: The Motel Life transcends its frustratingly uneven screenplay with some outstanding work from a talented cast.

Critic Consensus: The Motel Life transcends its frustratingly uneven screenplay with some outstanding work from a talented cast.

Based on the popular novel by Willy Vlautin, THE MOTEL LIFE is a searing and profound examination of brotherhood set in the timeless Sierra Nevadan frontier. Frank (Emile Hirsch) and Jerry Lee Flannigan (Stephen Dorff) work odd jobs, drink hard, and drift from motel to motel. Their only escape is through Frank's fantastic stories and Jerry Lee's rich illustrations. Everything changes when Jerry Lee is involved in a hit-and-run accident, which forces the brothers across the state to the home of Frank's old flame, Annie (Dakota Fanning). While the two seem safe from the law, Jerry Lee's insatiability and all-consuming guilt render their future increasingly uncertain. Like an outlaw country song, this directorial debut from real-life brothers Gabe & Alan Polsky finds beauty and hope in a world of casinos, gun shops, dive bars, and in the simple people who inhabit them. The film features animation by Mike Smith. (c) Official Site

News & Interviews for The Motel Life

View All The Motel Life News

Critic Reviews for The Motel Life

The film is more downbeat than tense, interweaves animation sequences, and perhaps worked better in the original novel.

The whole thing is deep-down conservative and wetter than a Labrador's kiss.

The rambling plot may resemble a lyric from a mawkish country song but the film-makers bring an engaging mix of tenderness and grit to the downbeat material.

The film is heavy-going, unformed and self-indulgent, with characters who are neither sympathetic nor (crucially) interesting.

Stephen Dorff excels as a luckless hobo in this bruised and booze-soaked adaptation of Willy Vlautin's 2007 novel.

Storytelling at its finest, The Motel Life is a deep reflection on the human condition and brotherly love.

The Motel Life feels a little too down-in-the-dumps for its own good at times, but sparks of energy supplied by Hirsch and Dorff illuminate an otherwise dreary film.

Too often veers from the road by misguided design.

As a mood piece it works extremely well.

A pedestrian, undeveloped indie clunker, its failure as a complete, satisfying story especially disappointing since the sibling relationship at its center could have been special with a better script.

Watching The Motel Life, I felt that I was in the hands of someone capable of making a great film.

Audience Reviews for The Motel Life

The dark indie drama The Motel Life is a macabre tale that's pointless and depressing. Based on a novel, two brothers, Frank and Jerry Lee Flannigan, are a couple of lowlifes living out of motels and cars who go on the run after killing a kid in a hit-and-run. The film has strong themes of living in regret and brotherly love, but the characters are unsympathetic degenerates. Starring Emile Hirsch, Stephen Dorff, and Dakota Fanning, the cast is pretty decent; however their performances are bland and uninspired. The directing is also an issue and is rather static; aside from randomly inserted animated sequences whenever Frank tells his brother a story. The Model Life is a largely forgettable film that doesn't really have anything to say.

Wow... what an unusual mystery thriller drama this was! I am not sure if I am going to remember it because of the acting of Emile Hirsch, Stephen Dorff, Dakota Fanning, and Kris Kristofferson or the debutant director brothers Alan and Gabriel Polsky, and their unorthodox approach to a story which was doomed and gloomed from the first second of the movie, but kept going and taking us along to an amazing experience which could turn sour for some viewers with less patience! The screenplay was masterfully adapted by Noah Harpster and Micah Fitzerman-Blue from Willy Vlautin's novel of the same name. The film was shot in Reno and Virginia City and also features excellently animated sequences drawn by Mike Smith. The odd heroes of this movie, Frank and Jerry Lee Flannigan work odd jobs, drink hard, and drift from motel to motel... As orphans they found an escape in Frank's fantastic stories and Jerry Lee's rich illustrations, which kept them going the next step forward... and forward... and forward. But, everything changes when Jerry Lee is involved in a hit-and-run accident! The brothers decide to run from the law, across the state to the home of Frank's old flame, Annie James. Sadly, while the two seem safe from the law, Jerry Lee's insatiability and all-consuming guilt render their future increasingly uncertain. Real-life brothers Gabe & Alan Polsky show us their narrative ability and directorial skills to find beauty and hope in a world of casinos, gun shops, dive bars, and in the simple people who inhabit them, people on the margin of the society - so often ignored as invisible and insignificant! And all that was shot by the cinematographer Roman Vasyanov - this was his first American feature film... using 35mm film, he was lauded by critics for his "gorgeous snow-flecked cinematography." Joe Morgenstern of the Wall Street Journal stated, "It's admirable and even memorable, in its moody fashion, thanks to Roman Vasyanov's richly textured cinematography-he's a shooter to keep our eyes on." Indeed! A team which needs recognition - go and check it out yourself what I am talking about! It's well worth it.