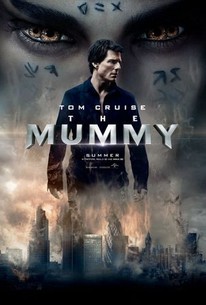 Critics Consensus: Lacking the campy fun of the franchise's most recent entries and failing to deliver many monster-movie thrills, The Mummy suggests a speedy unraveling for the Dark Universe.

Critics Consensus: Lacking the campy fun of the franchise's most recent entries and failing to deliver many monster-movie thrills, The Mummy suggests a speedy unraveling for the Dark Universe.

Critic Consensus: Lacking the campy fun of the franchise's most recent entries and failing to deliver many monster-movie thrills, The Mummy suggests a speedy unraveling for the Dark Universe.

Tom Cruise headlines a spectacular, all-new cinematic version of the legend that has fascinated cultures all over the world since the dawn of civilization: The Mummy. Thought safely entombed in a tomb deep beneath the unforgiving desert, an ancient princess (Sofia Boutella of Kingsman: The Secret Service and Star Trek Beyond) whose destiny was unjustly taken from her is awakened in our current day, bringing with her malevolence grown over millennia and terrors that defy human comprehension. From the sweeping sands of the Middle East through hidden labyrinths under modern-day London, The Mummy brings a surprising intensity and balance of wonder and thrills in an imaginative new take that ushers in a new world of gods and monsters. Cruise is joined by a cast including Annabelle Wallis (upcoming King Arthur, television's Peaky Blinders), Jake Johnson (Jurassic World), Courtney B. Vance (TV's American Crime Story: The People V. O.J. Simpson) and Oscar (R) winner Russell Crowe (Gladiator). The creative team on this action-adventure event is led by director/producer Alex Kurtzman and producer Chris Morgan, who have been instrumental in growing some of the most successful franchises of the past several years-with Kurtzman writing or producing entries in the Transformers, Star Trek and Mission: Impossible series, and Morgan being the narrative engineer of the Fast & Furious saga as it has experienced explosive growth from its third chapter on. Sean Daniel, who produced the most recent Mummy trilogy, produces alongside Kurtzman and Morgan.

Courtney B. Vance
as Col. Greenway

Grace Chilton
as Woman in Toilet

Hannah Ankrah
as Woman in Toilet
View All

Critic Reviews for The Mummy

The film can't decide what it wants to be other than a Tom Cruise vehicle.

This incarnation of the wrapped figure is a dusty combination of Fatal Attraction and Mission: Impossible, making for one of the year's worst films.

It feels less like a movie than a series of compromises worked out by a corporate committee.

Alex Kurtzman's The Mummy reboots a franchise I would gladly have dispensed with from the start.

Pathetic on just about every level.

It's not enough to promise moviegoers that the two hours of movie they just sat through will pay off in another year or two or three, when the sequel arrives. They have to pay off now.

A plastic product made by mercenaries, pimps and profiteers rather than filmmakers who give a damn.

The Dark Universe and original monster squad deserve more than this underwhelming film.

Many of the fight sequences are so chaotic that they conceal the nature of the choreography.

If you want Tom Cruise on autopilot, wait for the Top Gun sequel...

There's no curse about this. It's one of the most uninspiring films of the year.

Audience Reviews for The Mummy

The beginning is actually quite promising. Cruise works great in what feels like an "Uncharted" adventure and the following plane crash is almost on a Mission Impossible level of intensity. Unfortunately, as the Dark Universe opens up, the tone of the film oddly jumps from horror scenes to humor and back in rather gloomy and underwhelming settings. That continues all the way through the mediocre showdown. And it turns out that sometimes a face can be too familiar for a certain kind of film.

There's a great airplane-going-down sequence early on in The Mummy that promises one helluva thrill ride of a movie, and indeed, there are a coupla scenes that match it. But halfway in Russell Crowe has the unfortunate task of delivering the lines: "I'm Doctor Jekyll," after which the movie, like the plane crash mentioned before, careens out of control and into more and more unbelievable territory that'll leave you shaking your head in stupidity. All this, and the first Tom Cruise movie I've seen wherein it felt as if he wasn't in control. One half good movie, and then one half schlock, interesting for just that reason.

Alex Kurtzman's The Mummy unravels into mediocrity. Unearthing at 110 minutes, The Mummy manages to explain more than enough, while moving at a comfortable steady pace. With that said, despite the fact that the film goes down a horror suspense path, rather than a campy fun one, The Mummy fails to deliver on the scares or thrills. The surprises are few and the main plot details of the film are predictable. The CG is hit and miss. It gets the job done without hitting anything out of the ball park. The action is stale, also leaving nothing to remember. Tom Cruise is the life of the film, but not a show stealer. Everyone else is underutilized, like Sofia Boutella, or out of place, like Jake Johnson. Annabelle Wallis and Russell Crowe blend in with the rest of the picture. The Mummy has its place in the dark universe; there just isn't much of an impact.