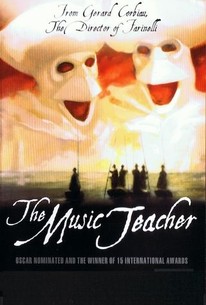 The title character in the Belgian-French The Music Teacher is a retired opera star, played by Jose Van Dam. The teacher's most gifted pupil is singer/musician Anne Roussel. Her love for her teacher is one of the motivating factors of the story, as is Roussel and Van Dam's relationship with another pupil, petty thief Philippe Volter. Complicating matters is one of Van Dam's old enemies, who endeavors to exploit the talents of the pupils. Written and directed by Gerard Corbiau, The Music Teacher unfortunately drags whenever the principals stop singing and start talking. But what singing! And what cinematography! Small wonder that this film was nominated for a "Best Foreign Picture" Academy Award.

Jean-Louis Sbille
as Critic
View All

This operatic melodrama, which divided critics due to its florid plotting, was nominated for the Best Foreign Language Oscar.

A well made, entertaining work, but it never quite gets away from the sense that it's a bit of a 'culture vulture' version of the traditional uplifting sports movie.

A valentine to opera singers and the glories of their art

There are no featured reviews for The Music Teacher (Le maître de musique) at this time.