The Muslims Are Coming2013 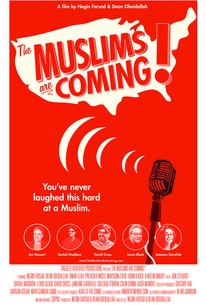 The Muslims Are Coming Photos

The Muslims Are Coming! is a comedy documentary which follows a band of Muslim-American comedians as they visit big cities, small towns, rural villages, and everything in between to combat Islamophobia! These comedians not only perform standup at each tour stop but create ridiculous interventions in unsuspecting town squares, like the ol' classic, "Ask a Muslim Booth" and "Name That Religion." Throughout the film, comedy icons like The Daily Show's Jon Stewart, David Cross, Janeane Garofalo, Colin Quinn, Lewis Black, Aasif Mandvi and media heavy weights like Rachel Maddow, Russell Simmons, Soledad O'Brien, Ali Velshi and Congressman Keith Ellison comment on the power of comedy and the political scope of bigotry. The film is truly about freedom of religion in America for people all faiths. And rest assured, you've never laughed this hard at a Muslim! (c) Official Site

Critic Reviews for The Muslims Are Coming

The comics are not especially funny.

The film follows a group of Muslim-American comedians on a stand-up-and-public-relations tour who try to win over those skeptical of Muslims, one audience at a time.

Supporting commentary comes from the likes of Jon Stewart, Lewis Black, and Rachel Maddow, but the real stars, rightly so, are Farsad and Obeidallah.

This slight but entertaining documentary scores laughs along with its sociological points.

The comedy routines are so-so (though the falling-in-the-aisles reaction shots tell another story) and the comics' patchwork odyssey often derails into irrelevancies.

This well-intentioned "docu-comedy" (as the filmmakers label it in publicity notes) is not very funny.

If nothing else, the film acts as a superb calling card and character study for this very singular group of comedians eager make people laugh regardless of race creed or political affiliation.

The Muslims Are Coming achieves what it sets out to accomplish, offering an entrance point for a culture too few know much about in a consistently engaging way.

It's all very admirable, but you may find yourself nodding in agreement more than doubled with laughter.

For better and for worse, this feels less like a feature film than a stretched-out Daily Show segment.

Viewers outside the tristate area may have their minds blown. The rest of us may be only mildly amused.

Much of the stand-up material caught on camera has a ring of familiarity and settles for rehashing ethnic and religious stereotypes in new ways. But the best of it provides a perspective, and a punch, transcending the same old punch lines.

Audience Reviews for The Muslims Are Coming

There are no featured audience reviews yet. Click the link below to see what others say about The Muslims Are Coming!

The Muslims Are Coming Quotes