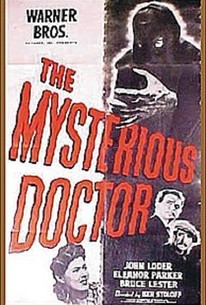 A Warner Bros. attempt to ape the success of the Universal horror films, The Mysterious Doctor is a moody little piece centering around a series of decapitations. These outrages are being committed in a cloistered English village, and the perpetrator is supposedly a legendary headless ghost. For a while, suspicion falls upon the village idiot (Matt Willis), but the true culprit is mad doctor John Loder, who is using the "ghost" legend to cover up his Nazi activities. Eleanor Parker, a recent Warners contractee, is around to scream and look terrified. Mysterious Doctor wraps everything up in 57 minutes.

Harold De Becker
as The Peddler

Crauford Kent
as The Commandant

Critic Reviews for The Mysterious Doctor

Audience Reviews for The Mysterious Doctor

There are no featured audience reviews yet. Click the link below to see what others say about The Mysterious Doctor!