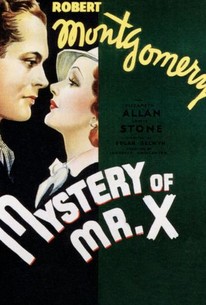 The Mystery of Mr. X Photos

MGM was seldom content to just film a mystery; the story had to be dressed up in some elaborate, unorthodox fashion. Mystery of Mr. X is given an additional visual boost by setting the story in 19th century London, allowing for a full array of the costumes and plush backgrounds of the era and locale. Robert Montgomery is an elegant jewel thief who happens to be working the same territory where a mysterious murderer has struck. Montgomery deduces that the killer, whose victims are all constables, is operating in a pattern resembling the letter "X". To avoid being mistakenly arrested as the murderer, Montgomery endeavors to second-guess where the killer will strike next--and then lies in wait to trap Mister X himself. Adapted from a novel by Philip MacDonald, Mystery of Mr. X was remade in 1952 as The Hour of Thirteen.

Alec B. Francis
as Judge Malpas

Raymond Lawrence
as Padgot
View All

Critic Reviews for The Mystery of Mr. X

There are no featured reviews for The Mystery of Mr. X at this time.

The Mystery of Mr. X Quotes