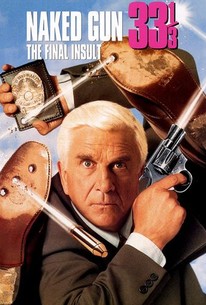 Critics Consensus: Naked Gun 33 1/3: The Final Insult can't help but be sporadically funny thanks to Leslie Nielsen's dependably solid work, but it's still a steep comedown from the original.

Critics Consensus: Naked Gun 33 1/3: The Final Insult can't help but be sporadically funny thanks to Leslie Nielsen's dependably solid work, but it's still a steep comedown from the original.

Critic Consensus: Naked Gun 33 1/3: The Final Insult can't help but be sporadically funny thanks to Leslie Nielsen's dependably solid work, but it's still a steep comedown from the original.

The further misadventures of bumbling Los Angeles police Lieutenant Frank Drebin (Leslie Nielsen) are chronicled in this third installment in the popular Naked Gun comedy series. This by-the-numbers entry begins with Drebin as a happily retired house-husband called back into action when an evil terrorist organization threatens Los Angeles. As in the other Naked Gun films, this plot is merely an excuse for an unhinged, rapid-fire succession of gags, ranging from satirical lampoons of cop movies to broad slapstick, all played with a perfectly straight face. Nielsen provides his familiar combination of complete witlessness and oblivious dignity as Drebin, and the film attempts to match the earlier Naked Gun films -- and the Police Squad! television series that inspired them -- in the number of jokes. However, the film proved less successful than its predecessors, as some viewers found that the freewheeling comic style of the earlier films had solidified into its own formula, now mildly entertaining but disappointingly predictable. ~ Judd Blaise, Rovi

Ann B. Davis
as Herself

Vanna White
as Herself

Weird Al Yankovic
as Himself

Mary Lou Retton
as Herself

Pia Zadora
as Herself

Raquel Welch
as Herself

Florence Henderson
as Herself

Olympia Dukakis
as Herself

Mariel Hemingway
as Herself

Elliott Gould
as Himself

Shannen Doherty
as Herself

Morgan Fairchild
as Herself
View All

News & Interviews for The Naked Gun 33 1/3: The Final Insult

Critic Reviews for The Naked Gun 33 1/3: The Final Insult

Silly enough to make you laugh sometimes in spite of yourself -- at least if you're feeling like a little boy.

It's sad to see what started out as such a lively and creative series descend to this -- a feeble attempt to stretch a few pedestrian jokes into a feature-length film.

Wherever you are in the story, there's always something funny coming at you.

Manages to be not only still funny but energetically slapped together and occasionally inventive.

An unpretentious, silly, low-brow comedy that has the juice to induce laughter if you don't mind going low for the laughs.

The subtitle of Naked Gun 33 : The Final Insult seems to indicate the series has run its course.

Although the template is finally running out of steam, there are still enough gags worth catching.

Any film that can resurrect Pia Zadora from obscurity, if only to plunk a tuba on her head and toss her off a stage, deserves some kind of award.

Rich Cline
Shadows on the Wall
View All Critic Reviews (35)

Audience Reviews for The Naked Gun 33 1/3: The Final Insult

Not as great like the first two pictures. Still The Naked Gun 33 1/3 it's the final installment of an unforgettable serie and closing one of the best trilogies ever.

This features less decent laughs than 2 1/2 and the original, but does contain some more recognised scenes, from the opening, to the *SPOILER REMOVED*. However, Neilsen still maintains his reputation as a master of slapstick comedy

Pretty much to everyone's surprise the third and final installment of the most hilarious cop comedy series of all times is an enhancement after the second. Sure, a couple of jokes feel repetitive by now, you just know the type of things Frank Drebin will say or cause. The film makes up for that with a rather different story and especially an outrageous showdown at the Oscar show, which of course will never be the same again thanks to a certain Lieutenant. Overall, you're having way too much fun with the silliness to worry about a couple of jokes you may have seen coming. It was probably a good decision to end the series right there, at least it went out while being on top.

Leslie Nielson is back in one of the most shockingly disappointing sequels of all time. I cannot say that I hate this film, but it fails to provide any worthwhile comedy and the switch to dramatic moments was a very odd thing for s series like this to do. If they were going to have him become a cop again after retiring, then they might as well just thought of a better story and kept him on the police squad right from the start and have him retire at the end, it would have been a much better pace. Although , I must admit that seeing everyone one last time was amusing, and the final Academy Awards sequence was gut-splittingly funny, which leaves me with enough sympathy for the film to say that it shouldn't have been made, but after milking the franchise dry, it is what it is. I couldn't help but shrug my shoulders at how lame the jokes were and how overly stupid the slapstick was this time around. I do not recommend this film. I still say stick to the first and check out the second for a good laugh!