The Navy vs. the Night Monsters1966 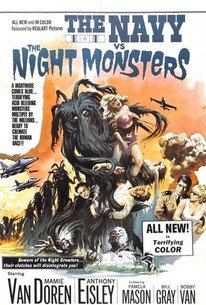 The Navy vs. the Night Monsters Photos

Dull, workaday life at the Navy weather station base on Gow Island is broken up -- violently -- when a transport plane from the antarctic, on a routine approach for re-fueling, sudden reports trouble and crash-lands. Most of the scientists and crew who were supposed to be aboard are missing, and the one man they do find, the pilot, is in a shock and can't speak. Then the local bird population gets disturbed, and soon people are disappearing, all while the scientists try to figure out the connection between all of these events and a corrosive residue that starts turning up. It later becomes clear that the island, now cut off from the outside world, is under assault by some kind of carnivorous species than can resist most weapons and breeds very fast. Lt. Charles Brown (Anthony Eisley), in temporary command, has to hold together his small navy crew and a coterie of scientists (Walter Sande et al) and civilians, including a nurse (Mamie Van Doren) in whom he has more than a professional interest.

Russ Bender
as Chief Warr. Off. McBride
View All

News & Interviews for The Navy vs. the Night Monsters

Kim Newman on… The Terrornauts

View All The Navy vs. the Night Monsters News

Critic Reviews for The Navy vs. the Night Monsters

Why bring the Navy into this mess?

Audience Reviews for The Navy vs. the Night Monsters

If you like Ed Wood, You'll love this attack of the killer trees movie. Bad script, bad acting, cheesy special effects. I just wasn't in the mood.

Mostly a snore, but a great curiosity. I bought this film in VHS format in a sketchy second hand video and electric shop on Bank St. The cover only had Mamie Van Doren on it and therefore led me to believe she'd be featured more. She's not. The print was transfers from horribly used reels, but it gave it that old look (super old). The one thing that makes this worth watching is -and a SPOILER this is so beware- Killer Trees!!!! That's right that's the night monsters. They even have an explanation for it. Brilliant.

The Navy vs. the Night Monsters Quotes