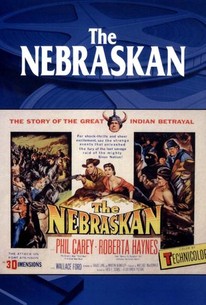 Virile leading man Phil Carey heads the cast of the 3D western The Nebraskan. Carey plays U.S. Army scout Wade Harper, assigned to keep his Native American aide Wingfoot (Maurice Jara) in protective custody. Accused of killing an Indian chief, Wingfoot is dearly coveted by the dead man's tribe, who'd like to exact their own brand of justice. Stirring up trouble among the whites is the scurrilous Reno (Lee Van Cleef), who gives psychos a bad name. The film's tiny budget is able to accommodate a few gratuitous "comin' at ya" 3D effects, which do little to enhance the overall quality of the film. More fascinating is the presence of Richard Webb, TV's stalwart "Captain Midnight", as a craven coward.

Critic Reviews for The Nebraskan

A listless and over familiar B film cowboy and Indians yarn.

There are no featured reviews for The Nebraskan at this time.