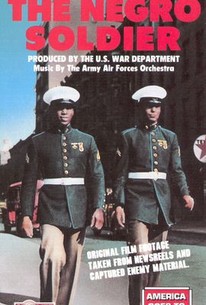 During WWII, the U.S. government produced numerous documentaries, often under the supervision of Frank Capra, designed to build support for the war. One of the more curious entries in this effort was The Negro Soldier. The structure of the film is that of a black minister who preaches a sermon to his all-black congregation. Over the course of 40 minutes, the minister recounts the contributions of blacks in American military history, from Crispus Attucks and the Boston Massacre to the men who served in WWI, along the way touching on the War of 1812, the Civil War, the exploration of the West and the building of the railroad, the Spanish-American War, and the building of the Panama Canal. Throughout, the filmmakers blend archival footage and Hollywood re-creations to illustrate the preacher's words, and even include a re-creation of the destruction by the Nazis of a WWI monument in France to African-American soldiers. The film then slips into a more general history, telling of Booker T. Washington, George Washington Carver and the roles blacks have played in such fields as law, medicine, global exploration, music, education, art, academia, and athletics. The second half of The Negro Soldier moves into the present, describing the crimes of the Germans and Japanese and filling the screen with graphic images of hangings, bombings, and bodies; following the sentimental story of a young man through basic training; and wrapping up with a slew of images showing African-Americans serving in all aspects of military life, from infantrymen and tank destroyers to engineers and quartermasters. The Negro Soldier was written by Carlton Moss, who would become an important figure in African-American independent cinema, and the following year the U.S. Navy released a follow-up of sorts, The Negro Sailor.

Critic Reviews for The Negro Soldier

... in an era when African Americans on the big screen were invariably subservient stereotypes or caricatured comic figures, it presented black men with dignity and respect as everyday Americans no different than white men.

Audience Reviews for The Negro Soldier

There are no featured audience reviews yet. Click the link below to see what others say about The Negro Soldier!