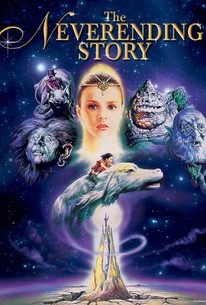 Critics Consensus: A magical journey about the power of a young boy's imagination to save a dying fantasy land, The NeverEnding Story remains a much-loved kids adventure.

Critics Consensus: A magical journey about the power of a young boy's imagination to save a dying fantasy land, The NeverEnding Story remains a much-loved kids adventure.

Critic Consensus: A magical journey about the power of a young boy's imagination to save a dying fantasy land, The NeverEnding Story remains a much-loved kids adventure.

Wolfgang Petersen adapted Michael Ende's children's story for this charming fantasy film that spawned several sequels. Bastian (Barret Oliver) is dealing with his mother's recent death. His father (Gerald McRaney) is an imperious sort who continually lambastes Bastian for daydreaming and falling behind in school. On top of his father's badgering, he has to contend with a bunch of school bullies waiting for him in the schoolyard. One day he decides to play hooky and walks into a strange bookstore, where in the attic, he discovers a book called "The Neverending Story". As Bastian reads the book, he's enveloped in the unfolding tale. A sickly child-like empress (Tami Stronach) from a land called Fantasia is concerned about who will take over the land if she dies. She decides it is best for Fantasia if she remains alive, so she dispatches a young warrior named Atreju (Noah Hathaway) to find a cure for the empress's malady. It turns out the land is consumed with a plague called The Nothing, generated by blighted dreams and hopeless fantasies. As Atreju continues onward to search for a cure for The Nothing, he encounters an assortment of strange creatures. Bastian is so consumed with the tale that he finds himself catapulted into the land of Fantasia himself. Atreju realizes that the only way to save the land from its blight is with the help of this strange earth boy, Bastian. ~ Paul Brenner, Rovi

Tami Stronach
as The Childlike Empress

Alan Oppenheimer
as Falkor
View All

News & Interviews for The Neverending Story

View All The Neverending Story News

Critic Reviews for The Neverending Story

This was sweet and charming at the time but now it just lacks either the comedy or sophistication of kids' fantasy film that we've all become accustomed to.

Despite the sophistication of the source material, the film isn't particularly successful.

A fairytale of the very best kind.

The world of this movie looks like a very particular place, and the art direction involved a lot of imagination.

The Neverending Story may have cost a mint to produce, but the result is bargain-basement.

The film has an almost overwhelming number of messages. From colonization and dispossession of land to the apathy of adulthood as well as the power of new beginnings

Though its foibles and failings haven't improved with age, The NeverEnding Story emerges in retrospect as a more ambitious children's movie than given credit.

...takes viewers back to a pre-CGI era when fantastic beasts and amazing worlds were created on screen using puppets and models.

Carries with it a healthy amount of menace, and intensity, but it's also a remarkable adventure.

This utterly enchanting, family treat of a film should leave you and yours wide-eyed with wonder.

Something dark, entrancing and even a little special.

Audience Reviews for The Neverending Story

Liked this when I was little. Still pretty good for a kids film. Not my taste these days, but have to admit the child actors are very good and the luck dragon is cute.

Good old fashioned family entertainment at it's finest. "The Neverending Story" is a film for all ages. Released in 1984, this film still holds up today as a family classic. Following Bastian as he discovers a book called "The Neverending Story" at his local book store, he takes it home out of pure curiousness put in his head by the book store owner. Upon his reading, he is immediately immersed in the story at hand. The story follows Atreyu, a young boy set on a quest to save their world from being consumed by what is known as the nothing. Becoming so immersed that he himself becomes a part of the story in his own mind, the characters begin to hear him. This film is chalk-full of imagination. This picture is the epitome of originality for all ages. With weird looking creatures to bizarre characters and storylines, this film never strays from clever and will have you immersed from the opening credits. It does scream 80's, but in the best way possible. I found myself smiling, tearing up, and being totally invested in what was happening to each and every character, even though it is totally a fictional world. I love every second of this film. It is not very often that we get films as original as this nowadays, especially when it comes to children's films. Sure, Pixar still does wonders for originality, but as far as live action family films go, this is a prime example of what filmmakers should be looking at achieving. Technology has come so far to the point where films like this can be achieved better than ever. For it's time though, "The Neverending Story" looks absolutely beautiful. Overall, this is an incredibly uplifting tale with hardship and fun sprinkled throughout. Younger audiences may get slightly more out of it, but it has a few very scary moments for younger audiences and adults may just feel their childhood screaming to come back out. From beginning to end, it finds new ways of being original and never once did I find myself rolling my eyes. For it's time, this was perfect family entertainment, and to this day, I still believe that it is. This film is (for what it is) is spectacular. Sure, it can be chuckle-worthy at times, but the story itself is worth telling over and over. Highly recommended to those who have yet to see this film.

Nope, I didn't enjoy it. Perhaps in 1984 it was entertaining, but neither the acting nor the special effects were satisfactory. I gave it 2 out of 5 as the story has possibilities.

this film is strange but clever and for the 80s the effects are fantastic to look at, the rockbiter at the beginning is amazing to watch and i still wonder how they do it. This film isn't the best film in the fantasy genre but when you compare it to the second film with the swapped cast and plot holes this film is God