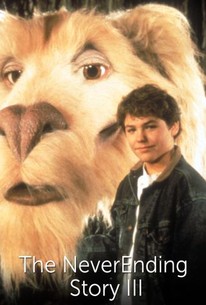 Young Bastian again seeks refuge from the problems of the real world in the mystical land of Fantasia in this second, inferior sequel to the sleeper 1984 hit The Neverending Story. The set-up is familiar, as Bastian Bux (here played by Jason James Richter), who has moved to a new town, again rediscovers the magical book that serves as the portal to Fantasia and finds solace in the power of imagination. Unfortunately, Bastian is having problems with a group of bullies known as the Nasties, who discover the boy's secret and steal the book. Their meddling wreaks havoc, ultimately releasing Fantasia's bizarre creatures into Earth's dimension. Naturally, it's up to Bastian to retrieve the book and return the Luck Dragon, Rock Eater, talking tree, gnomes, and other assorted creatures to their rightful home. Visually less impressive than its predecessors, and extremely distant from the Michael Ende book that was the series' original inspiration, The Neverending Story 3 made little impression on audiences or critics, who generally agreed that the film was the weakest of the series.

Carole Finn
as Mookie [The Nasties]

Nothing touches the original, but this sequel is still good children's viewing.

Okay, I agree since the first one had only half the book a sequel was acceptable, but this wasn't.

Oh dear God, The Neverending Story III is terrible! It starts out awful and doesn't lets up. Once again the series characters are reworked to be more cartoonish and silly. Nothing works and all continuity with the previous films is forgotten. The Neverending Story started out as a fantasy epic, but this installment is a ridiculous farce.

This is ironically the last of the neverending story movies. It has some of the same creatures as the others, but the major actors and characters are extremely different and changed from the original. I wouldn't recommend this movie.

So bad. Technically this is the second half of the book, but they really took a budget cut (and cast and crew cut) on this one.