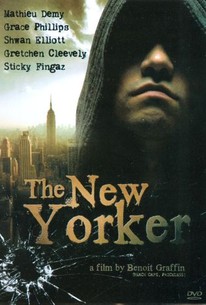 A Parisian ladies' man discovers an America full of shocking violence and destructive forces in The New Yorker, Benoît Graffin's searing, acerbic black comedy of cultural differences. Skirt-chasing Gaul Alfred (Mathieu Demy) and comely American tourist Alice (Grace Phillips) meet by chance and strike up a rapport during her whirlwind vacation in the City of Lights. Alas, Alice is soon jetting back over the Atlantic, which leaves the smitten Alfred hopelessly bereft, heartbroken, and determined to win her back. In a fit of desperation, he books a flight and follows in hot pursuit, settling in the Big Apple; his decision to set foot on a plane, however, represents the first of many disasters to befall him. In the course of Alfred's trip, the airline loses his luggage, and when he finally reaches Alice's doorstep, she isn't dazzled to see him (as expected) but instead rather disgusted - she doesn't hesitate to tell him to beat it. Never one to relent, the ever-persistent Alfred grows convinced that she will eventually buckle, and decides to settle in Manhattan until that moment arrives; he thus spends the following days attempting to track his luggage down, and - with no other options in sight - takes a job as a dog-sitter for the seedy businessman Farrakhan. At that point, matters go from bad to worse; Farrakhan's nasty daughter turns up and puts Alfred through hell, and he falls prey to some brutish types who decide to cast him in a "snuff" film - thus putting his life on the line. Meanwhile, Alice decides that Alfred just may be of interest to her after all.

Critic Reviews for The New Yorker

There are no critic reviews yet for The New Yorker. Keep checking Rotten Tomatoes for updates!

There are no featured reviews for The New Yorker at this time.