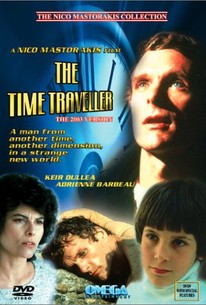 The Next One Photos

In this standard sci-fi romance, the widow Andrea (Adrienne Barbeau) lives on a Greek island with her son Timmy (Jeremy Licht) and, like the other islanders, is amazed when a stranger Keir Dullea washes up on shore during a magnetic storm. She brings the apparently injured man home to help him recuperate his health, and a relationship develops between the two of them. At first seeming to suffer from amnesia, the stranger has a mysterious quality that comes more into focus when he performs certain miracles. As he demonstrates his powers, it is slowly revealed that he is a time-traveler, and his brother, in fact, once traveled back 2,000 years further in time. That makes the stranger the "Next One" on this time journey -- appearing as a second Christ to the population, at least for awhile. With limited special effects and a chaste romantic scenario, this film debuted as a pay-for-view TV feature and was not released theatrically.

Keir Dullea
as Glenn/The Next One

Critic Reviews for The Next One

There are no critic reviews yet for The Next One. Keep checking Rotten Tomatoes for updates!

There are no featured reviews for The Next One at this time.

The Next One Quotes