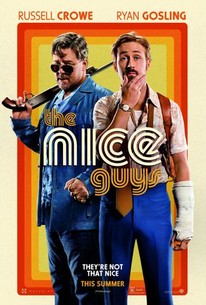 Critics Consensus: The Nice Guys hearkens back to the buddy comedies of a bygone era while adding something extra courtesy of a knowing script and the irresistible chemistry of its leads.

Critics Consensus: The Nice Guys hearkens back to the buddy comedies of a bygone era while adding something extra courtesy of a knowing script and the irresistible chemistry of its leads.

Critic Consensus: The Nice Guys hearkens back to the buddy comedies of a bygone era while adding something extra courtesy of a knowing script and the irresistible chemistry of its leads.

Greg Lindsay
as Stand Up Comic

Matthew Warzel
as Bartender at Sid's

Steve Wilder
as Perry the Lawyer

Marvin Ross
as Valet at Sid's

News & Interviews for The Nice Guys

View All The Nice Guys News

Critic Reviews for The Nice Guys

What's memorable about The Nice Guys is the crew of not-so-nice kids: the 12- through 18-year-olds who seem remarkably unbothered when bumping heads with coke-addled pornographers.

The Nice Guys is a major blast, Crowe and Gosling having the time of their lives bringing all this madcap, blood-splattered lunacy to life.

Too often, The Nice Guys feels like the Funniest Film of 1994. There are worse things.

Watching Crowe and Gosling-who are admittedly enjoying themselves in their respective roles-is fun, but the road wears thin along the journey...

[The Nice Guys is] propped up by the performances, humour, action, '70s detailing, a soundtrack with retro tracks (by Kool & The Gang and Earth, Wind & Fire, among others) and a cameo by the dishy Matt Bomer.

The Crowe-Gosling team might stir unhappy memories of what-were-they-thinking? twofers like Pat Morita and Jay Leno (Collision Course), Ted Danson and Howie Mandel (A Fine Mess) or Jeff Bridges and Ryan Reynolds (R.I.P.D.), but they're a dynamic duo.

The plot is cumbersome until it becomes painfully obvious who is behind it all, and then it becomes trite.

Ryan Gosling excels as a feckless and cowardly private investigator in a buddy comedy full of wit and energy.

The Nice Guys loses its way time and again, and generally not in an intriguing manner. The filmmakers rely on too many clichés and shortcuts (psychotic hitmen, quirky thugs and such) and too much pointless, time-wasting violence.

Funny and even thrilling by times, but its greatest trick is to make you fall on side with these two not-always-so-nice-guys.

Audience Reviews for The Nice Guys

Features everything there is to love about the buddy cop genre, and the nod at 80's culture was just the best icing on top you could ask for. I'm surprised Marsh's daughter isn't on the promotional images or the title because it might as well have been a 3-man show! Every laugh, punch, kick and gunshot is delivered with such excellence that it makes you forget the whole ordeal is a dated stereotype. It's almost amazing to enjoy such a well crafted buddy cop film in 2015 with all the elements you would expect from a classic. A truly great watch!

Funny and violent detective story set in 1970s L.A. Carried by two great stars (especially Gosling shows immense comedic talent) and fantastic kid actors, this is a wild, surprising ride, similar in tone to Black's Kiss Kiss Bang Bang. The tone between violence and slapstick may not resonate well with everyone, but for me this was a fun way to spend two hours.

This is a very good buddy cop movie with good performances from Rice and Crowe, and a hilarious turn by Gosling. The story is a bit messy, but the laughs are enough to make up for that. With the fun chemistry between this main cast, I wouldn't mind seeing a sequel.

A few laughs and liked the 70's setting.