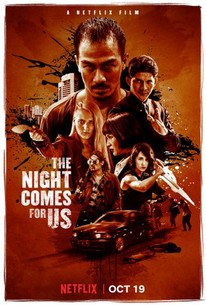 Critics Consensus: A bloody thrill ride designed to test the limits of more squeamish viewers, The Night Comes for Us wields a stylishly violent, action-packed punch.

Critic Consensus: A bloody thrill ride designed to test the limits of more squeamish viewers, The Night Comes for Us wields a stylishly violent, action-packed punch.

The Night Comes For Us Videos

The Night Comes For Us Photos

The Night Comes For Us follows Ito (played by Joe Taslim), a former triad enforcer, and his mission to protect a young girl while trying to escape his former gang after his mysterious disappearance setting off a violent battle on the streets of Jakarta.

News & Interviews for The Night Comes For Us

View All The Night Comes For Us News

Critic Reviews for The Night Comes For Us

Unless you are on the programming committee for the most literally bloody-minded of film festivals, you have never experienced as ludicrously violent and gore-soaked a film as The Night Comes for Us.

Here's hoping that someone of Tjahjanto's visceral talent eventually finds a way to stop the bleeding.

It uses a thin plot touching on the classic Hong Kong action themes of brotherhood and loyalty as an excuse to string together a series of gonzo action set-pieces so ingeniously bloody that one could conceivably classify the film as horror.

Tjahajanto upped his game with this, his second banzai action movie, and although the choreography still didn't quite rival the mastery of Gareth Evans or Isaac Florentine, one thing's for certain: he set the visceral brutality bar at an all new high

Easily one of the most thrilling and jaw-droppingly violent martial arts films of late, and one which more than fills the gap left by the absence of another Raid

If you're not disgusted by insane amounts of blood or guts, you should dare to watch "The Night Comes For Us"; it will leave you breathless. [Full review in Spanish]

Timo Tjahjanto directs a movie that is dominated by two elements, which actually complement each other: action and violence.

An utterly thrilling ride from the first second to the last, The Night Comes For Us is one of the best action movies of recent years.

...an assault on the senses...NIGHT essentially never bores us and always gets to the chorus.

'The Night Comes for Us' is savage, violent, and demented. [Full Review in Spanish]

[The Night Comes For Us] is one lovers of dark, bloody action extravaganzas should not miss out on.

Audience Reviews for The Night Comes For Us

The Night Comes for Us features levels of gore not found anywhere else but your most gratuitous horror flicks, so if you can't handle that sort of thing, I suggest you give it a wide berth. If some blood and guts aren't an issue for you though, WHAT ARE YOU DOING? WHY ARE YOU SPENDING VALUABLE TIME READING THIS REVIEW THAT COULD BE SPENT WATCHING THE NIGHT COMES FOR US?

The story may discombobulate some viewers amidst all the gory-goods of its action-packed violently choreographed sequences and ultimately The Night Comes for Us is hinged on all those epic moments and scenes that tests the boundaries of bloody-good action films and is sure to satisfy and maybe even surprise those moviegoers. 4/5

The Night Comes For Us Quotes