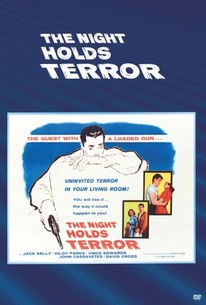 Though based on a true story, the principal inspiration for The Night Holds Terror was the success of Paramount's The Desperate Hours. Jack Kelly plays well-to-do businessman Gene Courtier, who makes the mistake of his life when he picks up hitchhiker Victor Gosset (Vincent Edwards). Soon afterward, Gosset and his criminal confederates (John Cassavetes, David Cross) are holding Courtier and his family hostage. Upon learning that Courtier has a lot of money in the bank, the trio kidnap the businessman and hold him for ransom. Working in concert with Courtier's wife Doris (Hildy Parks), the FBI manages to keep apace with the criminals via the telephone system. Only occasionally resorting to family-held-captive cliches, The Night Holds Terror is an effective suspenser. Leading lady Hildy Parks later became an influential TV and theatrical producer.

Joel Marston
as Reporter
View All

The acting, by a cast of non-celebrities, is amateurish in spots but darned if the thing doesn't stir up real spine-crawling tension before it finishes.

It is an intelligent thriller, where a desperate family is held captive by three vicious criminals.

There are no featured reviews for The Night Holds Terror at this time.