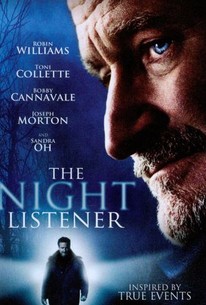 Critics Consensus: This psychological thriller compels by blurring the line between truth and fiction; unfortunately, the film itself gets muddled in a hazy account of Maupin's original novel.

Critics Consensus: This psychological thriller compels by blurring the line between truth and fiction; unfortunately, the film itself gets muddled in a hazy account of Maupin's original novel.

Critic Consensus: This psychological thriller compels by blurring the line between truth and fiction; unfortunately, the film itself gets muddled in a hazy account of Maupin's original novel.

A troubled radio talk show host's desperate attempt to contact the ailing teenage author of a disturbing manuscript leads him to a shocking series of revelations in director Patrick Stettner's big-screen adaptation of Armistead Maupin's controversial novel. Gabriel Noone (Robin Williams) is a popular radio talk show host whose turbulent personal life has become little more than fodder for the airwaves. Night after night, Gabriel shamelessly sits behind the microphone documenting the deteriorating health of his HIV-infected boyfriend Jess (Bobby Cannavale) to a rapt audience of loyal listeners. When Jess' health unexpectedly improves and he decides to break off the relationship in order to embrace his newfound independence, Gabriel soon finds that the sudden elimination of his most personal subject matter has left him with little means of relating to his audience. Subsequently handed a shocking, autobiographical manuscript by his publisher friend Ashe (Joe Morton) documenting the harrowing home life of a 14-year-old, AIDS-afflicted fan named Pete Logand (Rory Culkin), Gabriel soon receives a telephone call from a person claiming to be Pete, and the two strike up a fast friendship. The conversations between the pair ever more frequently punctuated by reports from Pete's overprotective stepmother, Donna (Toni Collette), concerning the teen's rapidly deteriorating health, Gabriel's growing suspicion that a literary hoax is in the making prove enough cause for the hesitant the publishing house that employs Ashe to back away from a lucrative distribution deal. Now, as the guilt of sinking a potentially lucrative deal for the long-suffering child begins to weigh down on Gabriel's increasingly frail shoulders, the guilt-ridden radio host boards a plane for the Logands small-town Wisconsin home to solve the strange mystery once and for all.

Robin Williams
as Gabriel Noone

John Cullum
as Pap Noone

Lisa Emery
as Darlie Noone

James Stankunas
as Boy in Hospital

Hal Robinson
as Male Friend No. 1

Keith Reddin
as Male Friend No. 2

News & Interviews for The Night Listener

View All The Night Listener News

Critic Reviews for The Night Listener

This thriller about books, belief and betrayal covers topical terrain -- JT LeRoy and James Frey, anyone? -- but itself proves unbelievable.

Robin Williams's face is permanently on its smiling-through-emotional-pain setting.

The plot dawdles along, intrigue gives way to risible melodrama, and [director] Patrick Stettner fails to get to grips with the issues.

The Night Listener is intriguing, thought-provoking and harrowing by turns, with fine central and supporting performances and a richly satisfying feel.

You should find this watchable and moderately clever; it's just a shame that it tries to sound weighty about truth and love, instead of getting on with being scary.

All roads lead to dead ends, in dramatic and investigative terms.

In the film, these profound themes become window dressing for a badly misconceived effort to turn Maupin into Hitchcock...

The Night Listener is just that - for night listening. Good to pop in the DVD if you're having trouble falling asleep.

The film's over-leveraged plot imparts diminishing results as its predictable revelation arrives with an unsatisfying anticlimax.

The Night Listener shamelessly jerks its audence this way and that, until it arrives at its lacklustre anti-climactic conclusion.

Even at 82 minutes, the film seems padded out, spinning its wheels and generating no suspense once the central, easily answered question is introduced.

One of those films where it's easy to recognize something's going on and there's interesting intentions but it just never comes together.

Audience Reviews for The Night Listener

A creepy and unsettling film. Robin Williams' performance was excellently suited to the character in this suspense film. I only wish we could have seen more of Sandra Oh.

The concept is good, but there's nothing beyond that here. Direction, acting, screenplay, background score: everything seemed too phony and quite ineffective here. There are too many inconsistencies in the movie and I couldn't help feeling distracted and, at times, bored. If you're suffering from insomnia, The Night Listener might be of some use to you.

Not very good at all. Very slow film with very little happening in it all based around one plot idea. Based on true events, however at 76 mins long there just isn't enough to interest you.

"Listen for the truth." In the midst of his crumbling relationship, a radio show host begins speaking to his biggest fan, a young boy, via the telephone. But when questions about the boy's identity come up, the host's life is thrown into chaos.

REVIEW
Written by Armistead Maupin (who co-wrote the screenplay with his former lover Terry Anderson and the film's novice director Stettner) and based on a true story about a fan's hoax found out has some Hitchcockian moments that run on full tilt like any good old fashioned pot-boiler does. It helps that Williams gives a stand-out, low-key performance as the conflicted good-hearted personality who genuinely wants to believe that his number one fan is in fact real and does love him (the one thing that has escaped his own reality) and has some unsettling dreadful moments with the creepy Collette whose one physical trait I will leave unmentioned but underlines the desperation of her character that can rattle you to the core.