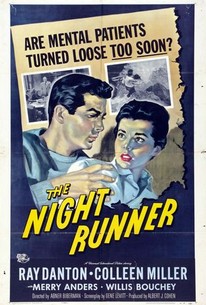 In this dark drama, a schizophrenic is forced out of his hospital due to overcrowding, and his doctors tell him to avoid stressful situations. He goes to a beachside motel and likes both the area and the owner's daughter. Her father discovers that he is a mental patient and threatens to have him recommitted unless he leaves his daughter alone. The schizophrenic snaps momentarily, killing him, and he and the daughter flee down the beach. He tries to kill her by pushing her into the water, but comes to his senses and rescues her. He ends up turning himself in.

Ethel May Halls
as Elderly Woman

Jay Berniker
as Boy
View All

Critic Reviews for The Night Runner

An unconvincing case study of a mental illness.

There are no featured reviews for The Night Runner at this time.