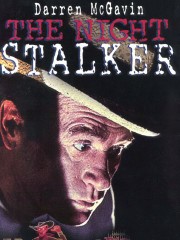 bill s
½ April 28, 2017
The start of something special even if it were short lived. The best of this series two TV movies and one of the best made for TV horror movies ever made.

Grayson W
½ August 5, 2015
An interesting early 70s made for TV movie about a Las Vegas journalist uncovering a local vampire. He wants to solve the case but the police want to cover it up. You've never seen a vampire hunt get so political...

a;slkfj a
February 27, 2015
Darren McGavin and vampires. Sounds good to me!

Michael W
January 22, 2015
Las Vegas reporter Carl Kolchak tracks a vampire after a series of bizarre killings in Las Vegas that has sin city on edge. Kolchak is one step ahead of authorities and the truth seems too unbelievable much to the ire of local police. Film earned the highest ratings of any tv movie at the time and launched a regular series that ran from 1974-75.

Matthew J
½ February 11, 2013
Despite strong performances from all involved "The Night Stalker" is a deathly repetitive story. The killer strikes, Kolchak sees the body, argues with the police, argues with the editor and than it all loops. Never-the-less it's an entertaining enough piece and the ending is very creepy and atmospheric.

James M
January 7, 2013
My cousins and I use to watch this in friday nights at 11:30 and be terrified! Thinking about you Jeff and Jason! It's still has that creepy effect

John C
August 11, 2012
A little rough around the edges, but it's still loads of fun, especially when we get to the confrontation at the end between the newspaper man and the vampire.

Joe A
½ May 12, 2012
For a while this 1971 TV movie was the most watched program in television history. A well made story of a fallen from grace reporter (Darren McGavin) who comes to believe a series of murders in Las Vegas are being committed by an actual vampire ( a creepy Barry Atwater). As the authorities (led by movie and TV vet Claude Akins) are in denial, reporter Carl Kolchak decides to confront and destroy the undead fiend himself, if the blood drinking Janos Skorzeny doesn't kill him first. A solid horror thriller for a TV movie and a strong characterization from "Christmas Story" dad, McGavin as Kolchak. There is very little blood as it was made for TV but, director John Llewellyn Moxey makes up for it by providing a healthy dose of thrills and chills and takes the proceedings very serious and that makes it all work. The Night Stalker is considered a classic by many and it spawned a decent sequel, Night Strangler, before becoming a TV series that sadly took a campy approach to the supernatural stories and the Kolchak character. Said to have been the inspiration for The X-Files. Also starring Simon Oakland as Kolchak's long suffering boss, Tony Vencenzo who would also join McGavin in the short lived series.

Kevin S
½ April 6, 2012
A television series that was, quite literally, "The X-Files" of my generation.

Mark M
June 24, 2011
Darrin McGavin was more then some dad in a christmas story as he plays an awesome reporter who does some vampire chasing. Led to the TV series of the same name.

Super Reviewer
David L
June 20, 2011
When a skeptical reporter named Carl Kolchak gets involved in covering a murder spree in Las Vegas he ends up with more than he bargained for. His hopes for getting a huge story that will propel him back to the "big time" in New York City seems to happening for him as the bloodless bodies start to pile up around the Vegas strip. After continually butting heads with the local authorities, after he figures out that there must be an actual vampire stalking the streets, they finally give in. Kolchak helps them to track down and kill the creature, but doesn't get his big story. They double cross him and threaten to throw him in jail for murder (he staked the vampire himself) if he even thinks about publishing the story. Not only that but they run him and his girlfriend out of town as undesirables!
It surprises me how many horror fans aren't even aware of the Kolchak movies and the TV series that they spawned. The story is very well written and paced nicely, which shouldn't be a surprise. Genre and TV veteran Richard Matheson is credited with writing the screenplay for the movie. The vampire story is a cool combination of classic (super strength, afraid of crosses, and of course the stake in the heart) and contemporary (using his mental powers on a used car salesman, robbing blood banks). The television movie also does a great job of building tension and paying it off with a couple of "jump" scares that work. Plus I can't say enough about what a great idea the Las Vegas setting is. I mean where would any modern day vampire want to hang out at more than Vegas. What can you say about a cast that is headlined by the wonderful and always great Darrin McGavin. Not only is he great in the role, but he really makes it his own! His performance as the headstrong, grouchy, reporter is the heart of the show and why it succeeded (and why the heartless redo failed!). The rest of the cast is filled out with TV and genre regulars like Larry Linville, Simon Oakland, Claude Akins, and the great Elisha Cook Jr. This strong supporting cast only makes the movie that much better and more enjoyable.
This is a network movie of the early 70s and looks like it. Shot on film like a low budget movie it captures the flashy colors of the Vegas Strip and the dark shadows of Vegas's back alleys equally well. A modern audience might notice the lack of gore and effects, but this was shot for television and is more about the story and characters, so cut it some slack. There are several well-done fight scenes between the police and the vampire, particularly one outside a hospital that is pretty damn cool.
Bottom line for me is that this is a classic. When it comes to horror that was shot for TV it just doesn't get any better than Kolchak the Night Stalker. Highly recommended

Richard G
½ February 11, 2011
Made in 1972.Carl Kolchak,An abrasive Las Vegas newspaper reporter investigates a series of murders committed by a vampire.Made for tv movie and written by Richard Matheson,This Tv movie spawned a TV Series involving Kolchak battling the supernatural and i would'nt mind tracking the tv series down as this is quite a decent Vampire flick.

Shawn-Ray M
½ October 15, 2010
Although by today's standard this movie borders on the cheesy there is no denying the influence that it, and it's sequel and following television series, has had on many similarly-styled shows of the past 15 years. Darren McGavin's Carl Kolchak was the Fox Mulder of the 70s, pursuing the truth at any cost to personal reputation. There's a certain purity to a movie such as this; a style that has long since been lost (though I can do without the snap zooms used to display one's horror).

Blais E
October 4, 2010
Superlative early made-for-TV horror film which set the standard for many more to follow in the coming years. Starring the always-marvelous Darren McGavin as the run-down, world-weary slobovian hack journalist Carl Kolchak, unlikely vampire-hunter in the seedier environs of Las Vegas. Little-known character actor Barry Atwater makes for a truly terrifying vampire, hideously ugly & predatory. He gave me nightmares as a kid after watching this! One of two pilot films for the magnificent, but sadly short-lived "Kolchak: the Nightstalker" series that came a few seasons later.

Al M
½ September 3, 2010
An enjoyable made-for-tv supernatural detective film that introduced the world to rogue reporter Carl Kolchak and spawned a series. The Night Stalker is never brilliant and is often cheesy, but it is a fun hour of film that will delight fans of b-level horror.

Al M
½ August 20, 2010
An enjoyable made-for-tv supernatural detective film that introduced the world to rogue reporter Carl Kolchak and spawned a series. The Night Stalker is never brilliant and is often cheesy, but it is a fun hour of film that will delight fans of b-level horror.
Page 1 of 3