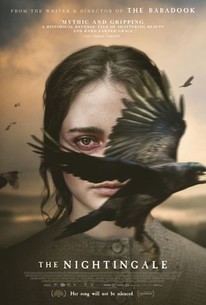 Critics Consensus: The Nightingale definitely isn't for all tastes, but writer-director Jennifer Kent taps into a rich vein of palpable rage to tell a war story that leaves a bruising impact.

Critics Consensus: The Nightingale definitely isn't for all tastes, but writer-director Jennifer Kent taps into a rich vein of palpable rage to tell a war story that leaves a bruising impact.

Critic Consensus: The Nightingale definitely isn't for all tastes, but writer-director Jennifer Kent taps into a rich vein of palpable rage to tell a war story that leaves a bruising impact.

THE NIGHTINGALE is a meditation on the consequences of violence and the price of seeking vengeance. Set during the colonization of Australia in 1825, the film follows Clare (AISLING FRANCIOSI), a 21-year-old Irish convict. Having served her 7-year sentence, she is desperate to be free of her abusive master, Lieutenant Hawkins (SAM CLAFLIN) who refuses to release her from his charge. Clare's husband Aidan (MICHAEL SHEASBY) retaliates and she becomes the victim of a harrowing crime at the hands of the lieutenant and his cronies. When British authorities fail to deliver justice, Clare decides to pursue Hawkins, who leaves his post suddenly to secure a captaincy up north. Unable to find compatriots for her journey, she is forced to enlist the help of a young Aboriginal tracker Billy (BAYKALI GANAMBARR) who grudgingly takes her through the rugged wilderness to track down Hawkins. The terrain and the prevailing hostilities are frightening, as fighting between the original inhabitants of the land and its colonizers plays out in what is now known as "The Black War." Clare and Billy are hostile towards each other from the outset, both suffering their own traumas and mutual distrust, but as their journey leads them deeper into the wilderness, they must learn to find empathy for one another, while weighing the true cost of revenge.

News & Interviews for The Nightingale

View All The Nightingale News

Critic Reviews for The Nightingale

Jennifer Kent's The Nightingale is a film that bruises the soul.

It's serious film-making, worthy of attention. Arguments, though, will ensue.

The most shocking thing about this shocking film? When it was over, I felt like I'd been released from a warm hug.

Like the world she depicts, Kent's storytelling shows no mercy.

The Nightingale proves to be a powerful study of survival, rather than the trauma itself.

The most shocking film of the year.

[The Nightingale]holds a darkly sober mirror that reflects the horrors of colonialism, racism, and misogyny.

"An unflinchingly violent film that is not able to tackle its politics about gender, race and violence in a nuanced way. Brutal from beginning to end but never left satisfyingly avenged."

The film cinematically captures the harsh elements of Tasmania and Clare's every emotion while the script splays open the traumas of these injustices from which only the most resilient can recover.

There are no featured reviews for The Nightingale at this time.