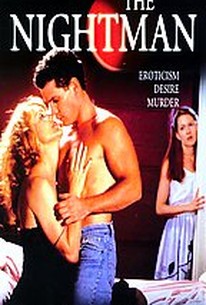 A daughter haunted by the memory of a morbid love affair suspects that the man who once seduced her has returned to kill her after eighteen-years after being convicted and imprisoned for murdering her mother. Mother and daughter have both had a torrid love affair with the same man, and in the end the mother paid for the transgression with her life. Though the diabolical seducer was quickly convicted and sent to prison, nearly twenty-years have passed and now the woman who was once a frightened young girl begins to suspect that the man who killer her mother has returned to claim her life as well.

Tom Even
as Sergeant

Critic Reviews for The Nightman

There are no critic reviews yet for The Nightman. Keep checking Rotten Tomatoes for updates!

There are no featured reviews for The Nightman at this time.