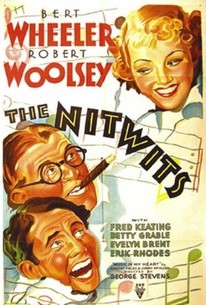 The Nitwits are Johnny (Bert Wheeler) and Newt (Robert Woolsey), cigar-counter proprietors in the building owned by music publisher Lake (Hale Hamilton). Johnny spends his spare time spooning with his sweetheart, Lake's secretary Mary (Betty Grable), while Newt tinkers with his inventions, the latest of which is an electric chair which compels the occupant to tell the truth. A none too lovable man, Lake has made enemies of several people, including his shifty assistant Lurch (Arthur Aylesworth) and disgruntled songwriter Clark (Erik Rhodes); he is also on the outs with Mrs. Lake (Evelyn Brent), who caught her husband "coming on" to the reluctant Mary. Thus it is that practically anyone could be the dreaded "Black Widow," a mysterious blackmailer-murderer who's been trying to extort money from Lake. Hired at a substantial fee to protect the publisher from the Black Widow is private detective Darrell (Fred Keating), but Lake is murdered in his office all the same. Suspicion immediately falls upon Mary, the last person to see Lake alive. Johnny gallantly takes the blame for the killing to protect Mary, while Newt, believing Johnny to be guilty, does his best to protect his pal from the cops. All of this seems rather heavy going for a Wheeler & Woolsey vehicle, but be assured that The Nitwits is definitely a comedy, with the stars at their peak under the direction of George Stevens. The beauty of the film is that it sustains its momentum even after Newt's "truth chair" reveals the identity of the killer to the audience (but not to our rather dense heroes); especially hilarious is a nocturnal chase through a costume warehouse, utilizing several gags lifted from Stevens' "Boy Friends" 2-reelers of the early 1930s. Nineteen-year-old Betty Grable doesn't have too much to do, though she proves a charming subject for the film's best song, Dorothy Fields and Jimmy McHugh's "Music in My Heart". Co-written by Stuart Palmer, of "Hildegarde Withers" fame, The Nitwits was the last of Wheeler & Woolsey's truly worthwhile films.

Dorothy Granger
as Phyllis
View All

Critic Reviews for The Nitwits

There are no critic reviews yet for The Nitwits. Keep checking Rotten Tomatoes for updates!

Audience Reviews for The Nitwits

There are no featured audience reviews yet. Click the link below to see what others say about The Nitwits!