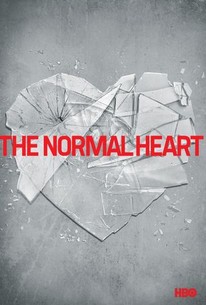 Critics Consensus: Thanks to Emmy-worthy performances from a reputable cast, The Normal Heart is not only a powerful, heartbreaking drama, but also a vital document of events leading up to and through the early AIDS crisis.

Critics Consensus: Thanks to Emmy-worthy performances from a reputable cast, The Normal Heart is not only a powerful, heartbreaking drama, but also a vital document of events leading up to and through the early AIDS crisis.

Critic Consensus: Thanks to Emmy-worthy performances from a reputable cast, The Normal Heart is not only a powerful, heartbreaking drama, but also a vital document of events leading up to and through the early AIDS crisis.

This drama tells the story of the onset of the HIV-AIDS crisis in New York City in the early 1980s, taking an unflinching look at the nation's sexual politics as gay activists and their allies in the medical community fight to expose the truth about the burgeoning epidemic to a city and nation in denial. -- (C) HBO

News & Interviews for The Normal Heart

View All The Normal Heart News

Critic Reviews for The Normal Heart

There is less reporting on poverty in America than on any other major societal issue. So it is with AIDS. That alone makes The Normal Heart an important film.

If anger and suffering were all there were to The Normal Heart, watching it would be torture. Luckily, it has heart to match its guts.

Despite its flaws, this iteration of The Normal Heart also exhorts us to remember.

Matt Bomer is heartbreaking as a New York Times style reporter looking for love in a loveless city. His physical transformation is astonishing and agonizing.

Time, and rewrites, have softened some of the play's stridency. More important, the romance between Weeks (Ruffalo) and his lover, Felix (Bomer), is given a more prominent role as is Felix's death spiral, giving the story power both broad and intimate.

If you can get past the director's tics and tricks, there are some bravura scenes from Mantello, Roberts and Ruffalo that are worth the price of admission.

While there are kinks in Murphy's adaptation, the raw power of Kramer's story cannot be diluted. It's a powerful memorial to the men that lost their lives and those they loved while fighting bring the AIDS epidemic to light.

HBO knows how to produce a compelling biographical movie...

Larry Kramer's blistering cri de coeur about the early days of the AIDS plague gets a solidly respectful but flawed treatment from Ryan Murphy.

proves that, sometimes, art does a better job of understanding history than the actual record

The collaboration between Murphy and Kramer seemed like a natural from the moment it was announced, and now we have the proof of that sensible decision -- in all its incendiary, heart-wrenching magnificence.

It's an impressive, relevant, and moving ensemble drama that I can't recommend enough.

Audience Reviews for The Normal Heart

With wonderful performances from an excellent cast, this extremely important, heartbreaking and infuriating drama exposes the revolting indifference and intolerance of American authorities in the early years of the AIDS epidemics - something that cost the lives of a lot of gays.

A profoundly moving film (even if a bit awkward in transitioning from stage to screenplay). A remarkable performance by Ruffalo, of a caliber I have never seen from him before. A great performance from Roberts as well. For those under 30 years old, this is an effective way of communicating the desperation and fear of a time that should not be forgotten. Highly recommended.

A fine effort but And the Band Played On and Longtime Companion told similar stories better.

It's an all star cast from Ryan Murphy with a strong performance from em even actors such as Taylor Kitsch, Matt Bomer, Jim Parsons, they can show a strong performance and level up with their senior such as Mark Ruffalo, Alfred Molina, or Julia Roberts.. The issue for the story of this movie indeed very sensitive, but Murphy delivers it pretty well..