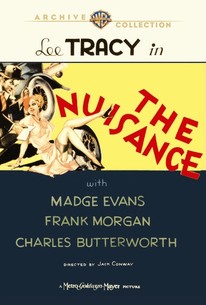 J. Phineas Stevens (Lee Tracy) is a personal injury lawyer whose practice has become a nightmare to any number of defendants, most notably the local streetcar company that handles transportation for his city. Between his steel-trap brain and machine-gun style delivery in court, and the machinations of his friend and expert witness Dr. Prescott (Frank Morgan), they've cost the company tens of thousands of dollars, with no end in sight. The corporation's lead counsel, Calhoun (John Miljan), decides to fight Stevens with his own tactics, setting him up by planting investigator Dorothy Mason (Madge Evans) in his midst, as a supposed injury victim. She's successful at beguiling Stevens, and gets enough on him to accidentally bring about the death of the one man he trusts -- and then she finds out that he's not solely the grasping mercenary that she thought he was; that he has an admirable side, as well; and that if he's gotten too good at gouging his opponents in court, it's partly the fault of Calhoun. Her second thoughts about her assignment set off a courtroom doneybrook, getting Stevens off the hook and Dorothy tossed into jail. And that sets Stevens after the streetcar company and Calhoun with a vengeance, and this time it's personal. With his best men, including inveterate conman "Floppy Phil" (Charles Butterworth), working for a cause and not just cash, it looks like Armageddon for the streetcar company and Calhoun, who won't budge an inch.

Syd Saylor
as Fred
View All

Critic Reviews for The Nuisance

There are no critic reviews yet for The Nuisance. Keep checking Rotten Tomatoes for updates!

Audience Reviews for The Nuisance

There are no featured audience reviews yet. Click the link below to see what others say about The Nuisance!