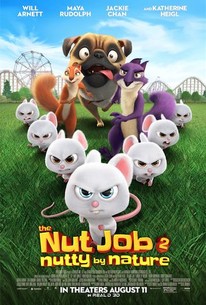 Critics Consensus: The Nut Job 2: Nutty by Nature may be a slight improvement over its predecessor, but its frantic animated antics still offer minimal entertainment to all but the least discriminating viewers.

Critics Consensus: The Nut Job 2: Nutty by Nature may be a slight improvement over its predecessor, but its frantic animated antics still offer minimal entertainment to all but the least discriminating viewers.

Critic Consensus: The Nut Job 2: Nutty by Nature may be a slight improvement over its predecessor, but its frantic animated antics still offer minimal entertainment to all but the least discriminating viewers.

Surly Squirrel (Will Arnett) and the gang are back. We are once again in Oakton where the evil mayor has decided to bulldoze Liberty Park and build a dangerous amusement park in its place. Surly and his ragtag group of animal friends band together to save their home, defeat the mayor, and take back the park. THE NUT JOB 2 also features the voice talent of Katherine Heigl (The Nut Job), Jackie Chan (Kung Fu Panda 3), Peter Stormare (Penguins of Madagascar), Bobby Cannavale (Ant-Man), Isabela Moner (Middle School: The Worst Years of My Life), and Maya Rudolph (The Angry Birds Movie).

Will Arnett
as Surly

Bobby Moynihan
as The Mayor

Peter Stormare
as Gunther
View All

Critic Reviews for The Nut Job 2: Nutty by Nature

Loud, silly and tired. Aside from an almost-fun Jackie Chan cameo, this is enough to give anyone a severe nut allergy.

The computer graphics are ugly and dated, the plot a clump of clichés, and with one notable exception, you can almost hear the voice cast scrolling through their phones in the recording booth.

It's a decent if unexceptional family option.

The pun-heavy script ("I am a weapon of mouse destruction," offers Jackie Chan's rodent) and the animation is almost as low-rent as one might expect from a film called The Nut Job 2: Nutty by Nature. Almost. Bring back Psy.

The Nut Job 2 goes full throttle on the timely stuff, resulting in a (slightly) more thoughtful and entertaining outing.

So from all this, I think you can see I didn't really care for this movie, I think people should really sit this one out and let it fail so that hopefully they learn not to put out a project like this into the market just to make a little cash.

Fans of the first film may like this more coherent sequel but otherwise The Nut Job 2 is pretty forgettable stuff, and seems unlikely to generate a third movie.

The story is predictable, but it is much better that the sleep-inducing first movie... But go watch it as a standalone film, and you will be fine.

I think this is a significant step up from the first one in almost every way.

The Nut Job 2: Nutty By Nature isn't really all that nutty.

If you're looking for a clean, afternoon watch with the kids, I've seen better and I've seen worse.

Audience Reviews for The Nut Job 2: Nutty by Nature

The wacky adventures of Surly Squirrel and his friends continue in the animated family comedy The Nut Job 2: Nutty by Nature. After the abandoned nut store is destroyed Surly and his fellow park animals are forced to return to the park and forage for food, but are soon kicked out when the mayor tears it down to build an amusement park. The voice work and the animation are really well-done, creating fun and interesting characters. And the soundtrack features some catchy songs that bring a lot of energy to the film. However, the script is formulaic and the villains are all one-dimensional stereotypes. Still, The Nut Job 2: Nutty by Nature is an entertaining film that delivers plenty of laughs.

In contrast, The Nut Job actually tries to be something that ended up being a critical failure in the first place. That's how it deserves that score it earns today. The Nut Job 2: Nutty by Nature, on the other hand, is begging itself to be better than its predecessor and also begging you to love it so that it can earn more money at the box office. If you get fooled by these things, it seems as if you're not ready to become the biggest moviegoer yet.