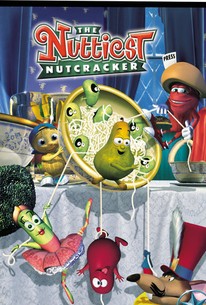 In this computer-animated update of the classic Christmas tale The Nutcracker, a girl in her early teens gets the bad news that she won't be able to see her parents for the holidays. Depressed by the news, she goes to sleep with her favorite toy, a nutcracker that resembles a toy soldier. When she wakes up, she discovers that the toy has come alive and she has shrunk to its size. She and the nutcracker are spirited off to Christmas Land, where our heroes are joined by fruits, vegetables, and even a pack of nuts, which all come to life as they do battle against Reginald the Rat King, who wants to stop Christmas from coming. The Nuttiest Nutcracker features James Belushi, Cheech Marin, and Phyllis Diller; R&B star Peabo Bryson performed two original songs on the soundtrack.

Critic Reviews for The Nuttiest Nutcracker

Silly twist on the classic adds veggies and goofiness.

Its bright colors and intricate designs and movement will keep the adults entertained whenever the story and the songs don't.

There are no featured reviews for The Nuttiest Nutcracker at this time.