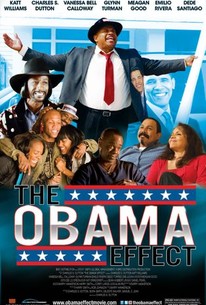 The Obama Effect movie, featuring Charles Dutton as John Thomas an insurance salesman in his 50's who suffers from serious health issues. Motivated by a misguided obsession with getting Barack Obama elected, John takes an overwhelming involvement in the Presidential campaign. While John becomes obsessed with the ideal of change that Obama represents for Americans, he has in turn neglected to create positive change in his own life, particularly with regard to his health and family relationships. John hides his health problems from his strong, yet supportive wife, Molly (Vanessa Bell Calloway), creating a strain on their marriage. When Molly discovers that John has been hiding his health scares from her, she urges him to take positive action to improve his bad habits. John works to get back on the right path with his health and family as Obama soars to success in the campaign. -- (C) Official Site

Critic Reviews for The Obama Effect

There are no critic reviews yet for The Obama Effect. Keep checking Rotten Tomatoes for updates!

Audience Reviews for The Obama Effect

There are no featured audience reviews yet. Click the link below to see what others say about The Obama Effect!