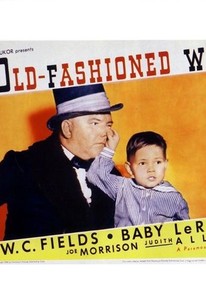 W.C. Fields plays the Great McGonigle, the manipulative manager of a large 19th century theatrical troupe. Notorious for skipping board bills and forgetting the pay his actors, McGonigle descends on a small town, where he relies on the hospitality of a wealthy widow (Jan Duggan). He secures lodging for his cast and financing for his production by promising the widow a major part in his upcoming production of The Drunkard. The play goes on as schedule, but the widow's part is cut down to one line which she's never permitted to deliver. McGonigle escapes with his hide again, but not before securing the future happiness of his daughter (Judith Allen) so that she won't have to spend the rest of her life one step ahead of the sheriff. The storyline of The Old-Fashioned Way is conveniently shunted aside as W.C. Fields does battle with Baby LeRoy, cons everyone in sight with equanimity, and offers the audience an uninterrupted display of his remarkable juggling skills.

William Blatchford
as Landlord of the Saloon in Play

Thomas Miller
as Villager in Play

Donald Brown
as Minister in Play

Tom Miller
as Villager in Play

Adrienne Ames
as Girl in Audience

George A. Billings
as Kid in Railroad Car

Sam Flint
as Man with Mallet
View All

Watching Fields spar with Baby LeRoy is a treat.

There really isn't anything to The Old-Fashioned Way except W. C. Fields. But W. C. Fields could play almost anything from Humpty Dumpty to Hamlet and make it notable.

There are no featured reviews for The Old Fashioned Way at this time.