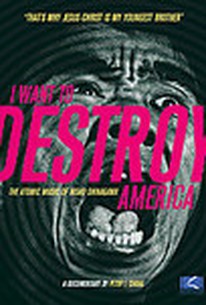 The American folk music revival of the 1950s and '60s is a well-known and laboriously discussed historical phenomenon, yet few realize that one man virtually prompted that genre explosion all by himself. Throughout the 1930s and '40s, music aficionado Harry Smith collected untold numbers of folk recordings on 78s, and assembled one of the most massive private libraries of its kind in recent history. In fact, Smith's reputation as a collector spread across the country and reached the preservationists at the Folkways label, who convinced Smith to let them compile and mass-issue a best-of compilation from his library. So began the folk boom, which quickly gave rise to such acts as the Kingston Trio, Peter, Paul and Mary, Bob Dylan, and Joan Baez. In the film The Old Weird America: Harry Smith's Anthology of American Folk Music, documentarist Rani Singh -- who worked as Smith's personal assistant, from 1989 until his death in 1991 -- chronicles the pioneer, his life story, and his little-known accomplishments. The film also features extracts from a concert in which contemporary artists including Nick Cave, Elvis Costello, and Beth Orton interpret old folk ballads from Smith's collection. Hal Wilner (Leonard Cohen: I'm Your Man) staged the performance segments.

There are no critic reviews yet for The Old, Weird America: Harry Smith's Anthology of American Folk Music. Keep checking Rotten Tomatoes for updates!

There are no featured reviews for The Old, Weird America: Harry Smith's Anthology of American Folk Music at this time.