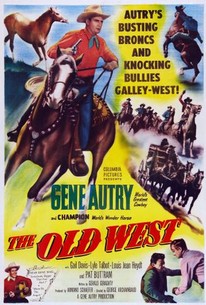 Gene Autry was clearly tiring of the rigors of moviemaking by the time he starred in The Old West. Even so, Autry gives his all to this story of frontier religiosity. Left for dead in an outlaw ambush, Gene is nursed back to health by a travelling parson (House Peters Sr.) Our hero decides to help the parson build a church in the wide-open town of Saddlerock, which does not sit well with local crime kingpin Doc Lockwood (Lyle Talbot). The villain not only tries to drive the parson out of town, but also does his best to ruin Autry's reputation. The good guys emerge triumphant, but it isn't easy. Featured in the cast of The Old West are Autry "regulars" Gail Davis and Pat Buttrum; also appearing is the ubiquitous Louis-Jean Heydt, delivering a superb performance as a stagecoach driver plagued by encroaching blindness, and House Peters Sr's namesake son House Peters Jr. as one of the outlaws.

Critic Reviews for The Old West

There are no critic reviews yet for The Old West. Keep checking Rotten Tomatoes for updates!

There are no featured reviews for The Old West at this time.