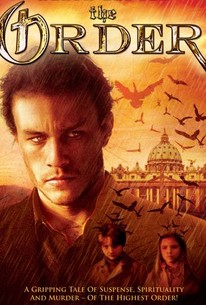 For centuries a secret Order has existed within the Church. Following a series of unexplained murders, renegade priest Father Alex Bernier begins an investigation that hurls him into a maelstrom of unimaginable evil, murder and the knowledge that there is a fate worse than death. Father Bernier's search takes him to The Sin Eater--a key figure in this mysterious and ancient Order. The immortal Sin Eater's role is nothing less than playing God on earth by absolving the unforgivable of their sins outside the Church, allowing greater evil to go unpunished. Burdened by centuries of evil, the Sin Eater craves the luxury of death. But who will eat his sins and grant eternal peace? Who will carry on his dark tradition and continue the work of the Order? As the young priest uncovers the answers and pursues these paragons of evil, he fights to save his own soul and that of troubled artist Mara, the woman he loves.

Luigi Basagaluppi
as Father of Eden

Critic Reviews for The Order

Devout Catholics will be appalled; everyone else will be asleep.

Blood in. Blood out. Eye roll.

The picture is so lethargic that I began to think of watching it as a form of atonement.

It's The Exorcist warmed over.

May be the nadir of the subgenre that produced The Exorcist (at its high end) and Stigmata (at its middle-to-low end).

An ordeal to sit through.

You'll be wishing you'd gotten your satanic-flick fix by staying home and renting The Omen.

There are some fantastic concepts, but they are presented in the most convoluted and careless manner.

"The Order" is a halfhearted "supernatural thriller"%u2014interpret as not an actual "horror" movie...

It's long on atmosphere and whispered moments of creepy discovery.

This has to be one of the most inconsequential films dealing with religion ever made.

Audience Reviews for The Order

o dear what a mess of a horror movie!!

It started by reminding me of the classic horrors of the 70's such as Don't Look Now and The Exorcist. The visual style and slow build up was all very nice. The build up continued for another hour before landing flat on its face. There seems to be so much talking and explanation that perhaps this would have worked better as a book. Instead it has some interesting ideas but no horror, thrills or anything vaguely interesting. Performances are good, though it's hard to tell with such dull characters. The film just about makes sense with evil demons, hooded men and...actually I'm not so sure it does all make sense. The most fun I had was spotting the eerie premonitions of Ledger's casting in Dark Knight such as a the light through a stain-glass window giving him green hair, and a scene where he is attacked by bats. OMG!

As the one half conjures up excruciating boredom and the other breathless excitement, the term 'religious thriller' is an oxymoron. I wasn't expecting much from this and it didn't disappoint, but I'm surprised how quickly it is fading from my memory, considering I only watched it last night. It's not awful, just mediocre. The cast is fine but the story stinks. Demonic children pop up for no other reason than to create a bit of cheap atmosphere, and to provide an excuse for some CGI effects.

I didn't hate this movie. I really thought that I would, but I didn't. The acting is a bit shallow and the character development is very lacking and the plot line is thin (as well as some trite , overused, stolen lines, ie Nietzsche: "Sometimes when you look into the abyss it looks back into you." and they didn't even have the good sense to quote the man), but still I could not hate this film. Why? Because it brought up some real brain food for me. It speaks to the Church's influence over not just this realm, but the realm beyond and how angered they might get by having thier authority undermined and circumvented. Therefor, in my mind, it speaks to the dangers of institutionalized religion (a subject near and dear to my heart). There are some cool special effects and scenery and, quite frankly, despite the fact that I would have liked knowing the characters a bit more intimately it did not detract from the point of the film. Witness the Sin-Eater...and I will stop there so as not to be a spoiler. If you are looking for a thriller with a few moments of horror/thrill (nothing too gory though not for the kids), some nice twists, and something to think about if you are open to it then you might want to consider this movie as a rental.