The Organizer (I compagni)1963 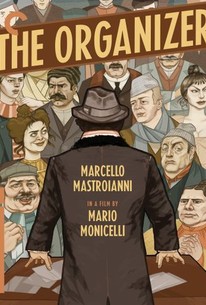 The Organizer (I compagni) Photos

The Organizer (I Compagni) takes a gritty, near-documentary approach to its subject matter: the exploitation of Italian laborers in the 19th century. Shorn of all his studio-imposed glamour, Marcello Mastrioanni plays a Genoan political refugee visiting a friend in Turin. Appalled by the horrible working conditions in the town's textile mill, Mastrioanni stays on to organize the workers in a strike. Though he is nearly killed several times, Mastrioanni survives to set an example for the workers, who rally together into a powerful union. The fact that Marcello Mastrioanni was bearded and bespectacled in the manner of a Bolshevist radical was enough for The Organizer to be condemned by certain extreme anti-Communist elements in Hollywood--to no avail, since the film was nominated for an American Oscar, and even given a commendation by the ultraconservative National Board of Review.

Critic Reviews for The Organizer (I compagni)

A nearly forgotten near-great movie, with one of Marcello Mastroianni's classic tragicomic performances.

Maybe you wouldn't expect a two hour Italian film about a strike in a Turin textile factory at the end of the 19th century to be especially entertaining. But wait until you see The Organizer.

Arguably one of the great Italian films of the 60s, it cries out for rediscovery.

That someone should have thought to cast Marcello Mastroianni as a seedy, itinerant, and slightly visionary nineteenth century labor organizer -- in The Organizer -- marks the triumph of a certain misapprehension.

Marcello Mastroianni is superb in still another new kind of role. With delicacy and restraint he fills in the outlines of a rather complex man, who is personally gentle, humane and inept but ruthlessly efficient as a professional troublemaker.

Shot on location, the movie has a neo-realistic feel, but sometimes the framing of the shots gives it a beautiful cinematic vibe that is far from gritty, despite its subject matter.

The style often features broad comic performances against a background of despair and defeatism; these were not comedies with happy endings which seems to be a contradiction.

Audience Reviews for The Organizer (I compagni)

There are no featured audience reviews yet. Click the link below to see what others say about The Organizer (I compagni)!

The Organizer (I compagni) Quotes