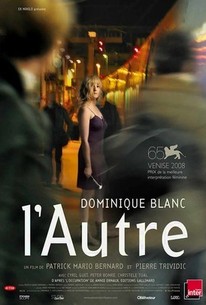 A middle-aged woman who gives her young lover his freedom is surprised when he begins seeing someone much like herself in this psychological drama from filmmakers Patrick Mario Bernard and Pierre Trividic. Anne-Marie (Dominique Blanc) is an attractive woman in her mid-forties who makes her living as a social worker and keeps an eye on an elderly woman with a drinking problem, Madame Schneider (Anne Benoit). Anne-Marie has been dating Alex (Cyril Guei), a man nearly twenty years her junior, but while he's eager to make a commitment, she isn't interested in marriage or a long-term affair. Anne-Marie gently breaks off their relationship, urging Alex to play the field a bit, and they remain friends. But Anne-Marie's feelings change when she learns that Alex has found a new girlfriend -- and she's the same age as Anne-Marie. Alex doesn't want to tell Anne-Marie much about his new lover, which makes her all the more eager to know everything about her, and before long Anne-Marie is consumed by jealousy, slowly sinking into madness as she obsesses over a woman who seems very much like herself. Dominique Blanc's performance in L'Autre earned her Best Actress honors at the 2008 Venice Film Festival.

Charlotte Clamens
as Suzanne
View All

Critic Reviews for The Other One (L'Autre)

There are no critic reviews yet for The Other One (L'Autre). Keep checking Rotten Tomatoes for updates!

There are no featured reviews for The Other One (L'Autre) at this time.

The Other One (L'Autre) Quotes