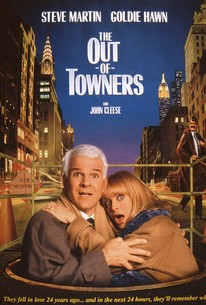 Critics Consensus: Solid source material and a cast of talented comedians aren't enough to make The Out-of-Towners worth hosting on a screen of any size.

Critics Consensus: Solid source material and a cast of talented comedians aren't enough to make The Out-of-Towners worth hosting on a screen of any size.

Critic Consensus: Solid source material and a cast of talented comedians aren't enough to make The Out-of-Towners worth hosting on a screen of any size.

When Frank Sinatra sang "If I can make it there, I'll make it anywhere, it's up to you, New York!" he probably didn't have the same odds in mind that line up against Henry and Nancy Clark in The Out-Of-Towners. Henry (Steve Martin) is an advertising man from Ohio who runs his life on an exacting schedule. His wife Nancy (Goldie Hawn) feels the spark has gone out of their lives together. After 24 years of marriage, their children are grown and nothing is tying them to their old home, so they decide to take a stab at relocating to New York City. Henry arranges a job interview in the Big Apple, they schedule a flight into Manhattan, and from that point on, anything that can go wrong does go wrong. Henry and Nancy's flight is delayed, their luggage is lost, their hotel reservations are cancelled, they're accosted by muggers, the cab they're riding in gets in a wreck, Henry is accidentally drugged and Nancy ends up in a group therapy meeting for sex addicts. The Out-Of-Towners is an updated remake of the 1970 comedy scripted by Neil Simon; the original version starred Jack Lemmon and Sandy Dennis as the hapless Midwesterners.

Rudolph W. Giuliani
as Himself

Anne Haney
as Woman in Bathroom

Charlie Dell
as Janitor on Train

Jerome Preston Bates
as Prisoner No. 1

Jacinto Taras Riddick
as Prisoner No. 2

L.B. Fisher
as Howard the Bellman

Christopher Duva
as Barry the Bellman

Critic Reviews for The Out-of-Towners

The Out-of-Towners jogs doggedly on the treadmill of comedy, working up a sweat but not getting much of anywhere.

Too much of the time the glow of the pair is dimmed by the labored slapstick and painful groaners.

How much you enjoy this 'Out-of-Towners' will have a lot to do with how many times you can laugh at what amounts to a series of variations on the same joke.

The whole thing feels so staged that I expected to see cue cards somewhere in the background.

This film has good matinee potential, if you're dying for an above-average comedy with Cleese in full drag. Otherwise, rent it.

Audience Reviews for The Out-of-Towners

One of Steve Martins better films, which doesn't say much.

My two favourite comic actors team up again. Their son has just left home, so they head to New York for a break, but get into all sorts of trouble,

Fairly fun, but nothing special.

Steve Martin and Goldie Hawn reunites since "HouseSitter" in this remake comedy film is a bit of laughs.