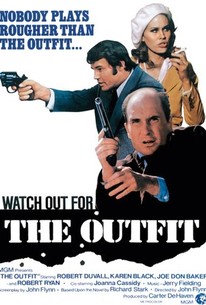 A two-bit criminal takes on the Mafia to avenge his brother's death in this drama based on a novel by Donald E. Westlake. Earl Macklin (Robert Duvall) is a small time criminal who is released from prison after an unsuccessful bank robbery only to discover that a pair of gunmen killed his brother. As it turns out, the bank that Earl and his brother hit was controlled by gangster Mailer (Robert Ryan). Macklin learns that he's on the mob's hit list as well, so he teams up with his old partner Cody (Joe Don Baker) to take on Mailer and his second in command, Jake Menner (Timothy Carey). The Outfit also features a top-notch supporting cast, including Karen Black, Sheree North, Joanna Cassidy, Richard Jaeckel, and Anita O'Day; Marie Windsor and Elisha Cook, Jr. also appear, 18 years after their memorable turn together in The Killing.

Anita O'Day
as Herself

Tony Trabert
as Himself

Critic Reviews for The Outfit

An outline of the plot would make it sound pretty routine, but what makes the picture superior is its richness of detail.

Shootouts, backstabbing, heists, hitmen, dangerous women, collateral damage, and an explosive finale are correspondingly on the menu for this gritty, slow-burn, revenge epic.

The Outfit remains something to avoid -- even on a rainy day.

A violent film that knows where it wants to go and dazzles in the efficiency on how excitingly it gets there.

Audience Reviews for The Outfit

There are no featured audience reviews yet. Click the link below to see what others say about The Outfit!