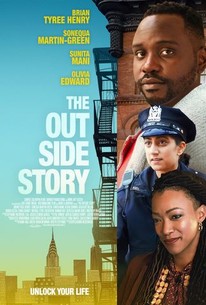 Critics Consensus: A refreshingly optimistic look at urban community life, The Outside Story is further distinguished by a layered leading performance from Brian Tyree Henry.

Critics Consensus: A refreshingly optimistic look at urban community life, The Outside Story is further distinguished by a layered leading performance from Brian Tyree Henry.

Critic Consensus: A refreshingly optimistic look at urban community life, The Outside Story is further distinguished by a layered leading performance from Brian Tyree Henry.

The Outside Story Videos

The Outside Story Photos

Brian Tyree Henry takes on his first big screen lead role as Charles Young, a broken-hearted video editor. Perceiving a betrayal of trust as a sign his girlfriend Isha (Sonequa Martin-Green) is leaving him, Charles preemptively blows up his relationship and sequesters himself at home. The fates do not comply and Charles locks himself out of his apartment. Stumbling into a transformational, timely odyssey exploring his community, Charles meets a dynamic ensemble of previously avoided neighbors (including Sunita Mani, Olivia Edward and Asia Kate Dillon) who show him everyone's got issues and it never helps to keep them all locked up.

Critic Reviews for The Outside Story

Even a bevy of idiosyncratic supporting characters (flirty policewoman, priggish gay upstairs neighbor, older woman looking for romance) can't compensate enough for a storyline that feels like it can't get off its own treadmill.

A great lil indie film...and even though it's a drama, it's actually a lot of fun.

It may not be exactly the experience we're going through right now, but Nozkowski's gentle charmer does serve as a reminder of the joys of going out and meeting people again.

The Outside Story will leave you smiling and ready to connect with your loved ones once again.

Increasingly, some of my favorite films can be described as "Nothing happens. And everything happens." That's this film, and it is a joy to watch.

Henry's tender performance and his buttered beauty mixed with clever dialogue to mask the cracks in the overall execution.

A character study so thin that a soft breeze through Central Park could blow it over.

Provides a leading man showcase to a talented actor and puts him in a variety of potentially humorous situations, but the film is disjointed, leading up to an ending that makes little sense.

A comedic drama that delves into the isolationist nature of our times and its detriment to community and relationships.

The tone is light, reminiscent of an old Seinfeld episode.

Rich Cline
Shadows on the Wall
View All Critic Reviews (50)

There are no featured reviews for The Outside Story at this time.

The Outside Story Quotes