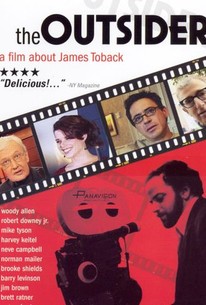 Filmmaker Nicholas Jarecki offers a celluloid portrait of a cinematic mastermind at work in this documentary shot over an eight month period and following director James Toback through each phase of production of his 2004 thriller When Will I be Loved. From pre-production to final cut, Jarecki follows the existential-minded director through the entire process of making a movie as Toback opens up to the camera to discuss a variety of deeply personal matters and explore just how they have manifested themselves in such films as Love and Money, The Big Bang, and Black and White. Candid interviews with such well-known Toback collaborators as Woody Allen, Robert Towne, Harvey Keitel, Roger Ebert, Brett Ratner, show just how much impact the well-respected filmmaker has had in Hollywood despite his stubborn refusal to fit into the commercialized mold so frequently associated with the showbiz mecca.

Critic Reviews for The Outsider

Jarecki's tour of Toback's world may glean more than probe. But as these kinds of trips go, even looking at the scenery yields fascinating sights and stirs worthwhile curiosity.

As is often the case with Toback's films, even as you're shaking your head at his shameless self-indulgence, you can't help but keep on watching.

The Outsider, Nicholas Jarecki's starstruck documentary about the writer and director James Toback, is a tragically missed opportunity to illuminate one of the more unusual cinematic talents working today.

Jarecki certainly thinks his subject deserves such an accolade, and he's made a great-looking film to make his case, one that is edited gracefully and briskly -- and leaves the heady aftertaste of birthday cake.

Among the great docs about moviemaking.

The Outsider is a first film and it comes with all the problems of a novice effort. It needs a firmer hand in the editing room and misses much of the point about what makes Toback so much an outsider in the Hollywood system.

Unless you're a fan, don't bother.

Toback quickly reveals himself as an insufferable, opinionated blowhard who pontificates shamelessly about the art of the cinema while indulging his own obsessions on film.

Watching The Outsider is like mainlining pure movie love.

a piece of maddening hero worship

Shot largely during the production of Toback's feature, When Will I Be Loved, Outsider features extensive interviews with many of Toback's longtime friends and colleagues.

Audience Reviews for The Outsider

Fun doc for fans of and those employed in the film biz. Some very interesting and candid interviews with various highly quotable artists. Starts off as a too-glamorized portrait of Toback, but then evolves into interesting as we watch how the man works and witness that distributing an indie personal flick is always hell, especially, and even, for this man. It was enjoyable but not a breakthrough composition in terms of the film, sort of just standard fare biopic montage of interviews and old photos with the main thread of the piece being the documentarian's footage of Toback's then newest adventure in film-making.