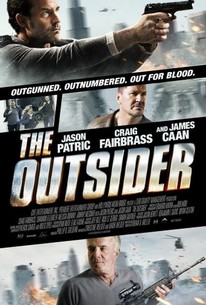 A British mercenary scours L.A. for his missing daughter with the help of a seasoned inner-city detective in this gritty action thriller. Lex Walker (Craig Fairbrass) is fighting on the front lines in Afghanistan when he is summoned to L.A. to identify his daughter Sam's remains. When the sheet at the morgue is pulled back, however, Lex is alternately shocked and relieved to see that it is not his little girl laid out on the slab. Yet the question remains - if this isn't his daughter, where has she gone? Convinced that his time to save Sam is quickly running out, Walker talks a local detective (Jason Patrick) into following the trail of clues straight to the wealthy internet entrepreneur (James Caan) who previously employed her. Later, with thugs and assassins closing in from all sides, Walker realizes that the only way to save his daughter is to use the skills he learned in Afghanistan on the mean streets of L.A. ~ Jason Buchanan, Rovi

Brian A. Miller
as Dr. Holden
View All

Critic Reviews for The Outsider

Just know, then, that when the big caper finally arrives, you will neither grasp nor care about what's going on.

Given a lot of style, this could have been another "The Limey"; given even a bit more humor and flashier action sequences, it might have passed for another Statham picture.

There's not enough here for even an imported action hero to work with.

The Outsider doesn't break the action movie mold in any way but it is an efficient little, low-budget crime thriller that has the good sense to not overstay its welcome.

Fairbrass moves stiffly through both the drama and fight scenes - as if he were underwater. Supporting parts in Jason Statham movies may be his calling, instead.

Blunt and simplistic, there's not a moment in this thriller that feels inspired by anything other than criminal TV shows.

Embraces its disposable B-movie leanings, but remains mediocre even under these modest prospects.

This isn't Taken, unless that's how you feel after forking over $10 bucks to see this thing.

Sadly, [a certain] baseline competence elevates The Outsider, just barely, into the realm of perfect forgetability.

A thoroughly generic action picture...The Outsider never rises above the clichés of an overpopulated genre.

Any entertainment value comes from peripheral things, like wondering what excuse they'll find to get Shannon Elizabeth into a tight, low-cut dress, or why every single light source in this film, no matter how small, emits a blinding lens flare.

Audience Reviews for The Outsider

Some Writer/Directors prefer to use the same actors in their films. You can't blame them for wanting to work with people they're comfortable with, but not many Writer/Directors, remake the exact same movie with a slightly different twist. Brian A. Miller came out of relative obscurity to produce the hit action thriller, The Prince, starring Bruce Willis. Less than a year later, he followed it up with The Outsider, which is basically the exact same film! The Prince featured a former mafia turncoat, going to the city he once owned, in order to find his missing daughter. The Outsider features a former member of British Special Ops, coming to America, to find his missing daughter. Both films have similar endings, mafia bosses that are played by legendary action stars, and oddly enough, both films have a cameo by 50 cent. These two films are literally so similar to one another, that aside from the British accent, and Jason Patric in the role of the cop, nothing has really changed. As a fan of action film, I realize there aren't many different directions these films can go in, but to release what amounts to the exact same film, a year later, with several of the same actors, is just bizarre. The Outsider wasn't a bad film, and I did enjoy Craig Fairbrass, he was a beast, who I was previously unfamilar with, but aside from that, this is the exact same story as seen in The Prince. Wheather you chose to sit through this one or that one, really depends on who you like better, James Caan or Bruce Willis.

A stereotypical revenge thriller, The Outsider is a mediocre film that's by-the-numbers. Craig Fairbrass plays a single father who goes to L.A. in search of his daughter, who was reportedly murdered but turns out to be in hiding. Fairbrass is serviceable as the lead, as his character is rather one-dimensional. However, the supporting cast, which includes Shannon Elizabeth, James Caan, and Jason Patric, is pretty good and gives some interesting performances. And the action beats are well-done, featuring some impressive fight choreography. Yet while The Outsider is entertaining, it's completely forgettable and has no ambition.

Another generic American action crime drama which will leave you with no impression after watching it. Solidly directed by Brian A. Miller and written by Craig Fairbrass, the film stars Craig Fairbrass, James Caan, Shannon Elizabeth, Jason Patric, Melissa Ordway and Johnny Messner. I know people who are actually fans of this type of movies, where there is no much talking, except basic phrases, and most of the issues are resolved with the fist in the face. If you like something like that, this should be on your list! Shallow story is about an investigation of a dead daughter of a military contractor Lex Walker (Craig Fairbrass) , and his discovery after the arrival in Los Angeles, that the body of the victim is actually not his daughter's. It is a simple low budget action movie with low budget results.