The Owl and the Pussycat1970 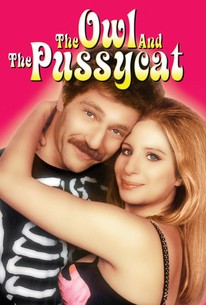 The Owl and the Pussycat Photos

The Owl and the Pussycat began life as a two-character Broadway play by Bill Manhoff, about a stuffy author who entered into an explosive relationship with his neighbor, a foulmouthed, freewheeling prostitute. Manhoff wrote the part of the hooker for a black actress, but all that changed when Barbra Streisand was cast in the role for the film version. George Segal portrays the male lead, and the play's two-character austerity was expanded to a cast of 19 speaking parts. Beyond the added characters (including Robert Klein as Segal's swinging roommate), the heart and soul of the film is the Segal-Streisand relationship; he is utterly appalled by her lifestyle, she is turned off by his prudishness, and both are made for each other. The Owl and the Pussycat was adapted for the screen by Buck Henry, who shows up in a cameo role in one of the bookstore scenes. The film represented the last work of cinematographer Harry Stradling, who'd previously photographed Streisand in Funny Girl; Stradling died during production, and was replaced by Ernest Laszlo.

Dominic Barto
as Man in Bar

Stan Bryant
as Gang in Car
View All

Critic Reviews for The Owl and the Pussycat

...the new permissiveness also gives Segal and Streisand plenty of chances to shine...

Like an insomniac on a hot summer night, my preference while watching this one is to throw a shoe at this meowing pussycat and her hooting owl friend.

...the film provides more wit than most of what passes for comedy today.

Audience Reviews for The Owl and the Pussycat

In the final half hour the characters become more enduring than obnoxious . . . its still a sanitized version of the original play, but its enjoyable in a weird way.

Sharp dialogue and excellent performances from the two leads, but the lack of genuine humor renders it a simple star vehicle. 67/100 More at: http://thegreatestreview.blogspot.com/2010/12/streisand-as-hooker-and-segal-as.html

The Owl and the Pussycat Quotes