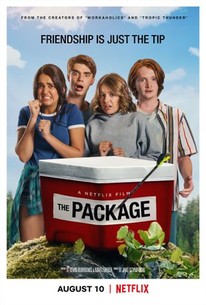 Critics Consensus: The Package learns the hard way that a penis joke does not a movie make.

Critic Consensus: The Package learns the hard way that a penis joke does not a movie make.

When four teens go on a spring break camping trip, an unfortunate accident sets off a race against time to save their friend's most prized possession.

News & Interviews for The Package

View All The Package News

Critic Reviews for The Package

A pseudo-experiment as stupid as it is genuine, and damn if this movie isn't totally committed to its premise.

To say that The Package is one continuous dirty joke with an outrageously absurd premise wouldn't be an exaggeration. It's also a funny, sweet, raucous teen comedy that's by turns ridiculous and raunchy, but thankfully never too profound.

Although it has good intentions and hunger for originality, the tangled script helps little to the development of the story. [Full review in Spanish]

It is not horrible, but there are too many things in it that we could use our time better than seeing it. [Full Review in Spanish]

The Package may very well be the Citizen Kane of penis movies.

Actually, there is one line that is so surprisingly funny that I had to go back and see if I heard it right.

The movie is dumb and silly. Once you buy in on the general antics, there are some high points.

With a less predictable plot, more out-there characters, and a greater sense of surrealism and pure chaos, it could have been much more than the final product: a generic teen rom-com with a dissected dick slapped on top.

If penis jokes still crack you up, this might be worth checking out. For those with more discerning comedic tastes, don't bother unwrapping this one.

There's honestly a lot of potential here, and the film is certainly watchable. But after a certain amount of time, you've well and truly gotten the joke.

An underwhelming entry in this esteemed tradition of penis-centric punchlines.

Audience Reviews for The Package