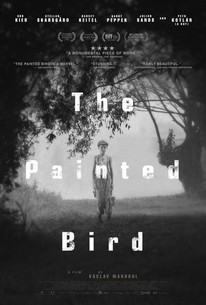 Critics Consensus: Brutally uncompromising in its portrayal of Nazi Germany, The Painted Bird is a difficult watch that justifies its stark horror with searing impact.

Critics Consensus: Brutally uncompromising in its portrayal of Nazi Germany, The Painted Bird is a difficult watch that justifies its stark horror with searing impact.

Critic Consensus: Brutally uncompromising in its portrayal of Nazi Germany, The Painted Bird is a difficult watch that justifies its stark horror with searing impact.

In an effort to save their child from the massive extermination of Jews, a Jewish couple send their son to hide in the countryside with a relative somewhere in Eastern Europe. The little boy's aunt dies unexpectedly and the stray child is suddenly forced to hit the road and make it on his own in a hostile world governed by hate, fear and violence. Struggling for pure survival, he journeys a world run by locals and villagers driven by prejudice, superstition and their own rules. When the war ends, however, his fight for survival is replaced by another struggle - a struggle he may not even be aware of, a struggle with himself, a struggle for his own soul, and his future...

Petr Kotlár
as A Boy

News & Interviews for The Painted Bird

The Indie Fresh List: We Are Freestyle Love Supreme, Decade of Fire, and The Painted Bird

View All The Painted Bird News

Critic Reviews for The Painted Bird

For all its overworked grotesqueries, it attempts an intriguing climb from the deepest pits of horror towards some kind of stoic grace.

The sequence of events is so relentlessly brutal as to become numbing, almost comical.

It's much easier, says The Painted Bird, to simply throw our hands in the air and declare humanity doomed.

The Painted Bird is a brutal kind of ordeal, but eerie, unearthly and even beautiful sometimes: a bad dream that leaks into waking reality.

With rare commitment, Marhoul sets himself to portraying such all-consuming human depravity, the only response is to crumple.

The Painted Bird is a potent, visceral but rewarding film for viewers who can withstand the onslaught of traumatizing moments.

It's heavy watching and certainly difficult for some to stomach. But the film draws you in with its slow moving camera that paints the scenes in a hauntingly beautiful black and white.

The Painted Bird is undeniably impressive, artful and powerful.

The horror of the content aside, this is a stunningly beautiful film.

Deals in visual poetry that compels attention even as it wallows in unkindness.

the Boy must constantly adapt to survive, while also being altered & scarred by his experiences, so that his true identity remains Protean - an Everyman, or at least Everyboy, for the shifting borders & compromised allegiances of the Second World War

There are no featured reviews for The Painted Bird at this time.