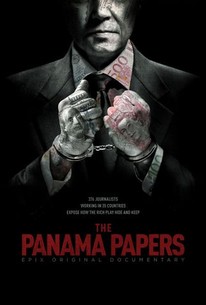 THE PANAMA PAPERS is a feature documentary that charts the story of the massive data leak that exposed the largest global corruption scandal in history. Hundreds of journalists around the globe worked in secret, at great personal risk, to reveal a scandal involving corrupt power brokers, the uber rich, elected officials, dictators, cartel bosses, athletes and celebrities who had used the Panamanian law firm of Mossack Fonseca to hide their money for any number of illegal reasons. The reports detailed tax evasion, fraud, cronyism, bribing government officials, election meddling, and murder. The investigation proved that the system is rigged, and cracked the vault of well-kept secrets and ill-gotten wealth, revealing vast and coordinated corruption among the world's elite. The significance for the average, tax paying, law-abiding citizen is enormous; with the leaks showing that at least $32 trillion was hiding in more than 80 tax havens in 2010 alone. But breaking the story was only the beginning. There was immediate blowback from many of the named and accused, who are using every tactic imaginable to silence the journalists.

Critic Reviews for The Panama Papers

a reminder of the important work reporters do in fighting abuses of power and the way that work is evolving in an increasingly fractured global landscape.

The Panama Papers is a lively and level-headed exposé, but it's also a moral inquiry into how the top echelon is now united, structurally and spiritually, in robbing the rest of us blind.

The Panama Papers is a decent primer to the events, which, even five years later, will still have you shaking your head in disbelief.

Alex Winter is quickly becoming a master of something one could call the techno-thriller documentary.

The most critical element of Winter's documentary is not the scandal itself, but the fact that hundreds of journalists from around the world were able to work together to expose this corruption, despite the consequences, and their egos.

A close and inspiring look at the network of investigative reporters who made the Panama Papers a historic breakthrough against the plutocrats who rule the world.

An important, exhausting and yes dispiriting film about the kleptocracy scandal that the world should care about.

The film is at its most alarming when it convincingly makes the case that systemic corruption and income inequality are fundamentally responsible for every global calamity out there.

Audience Reviews for The Panama Papers

There are no featured audience reviews yet. Click the link below to see what others say about The Panama Papers!