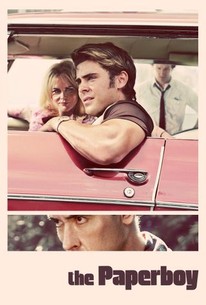 Critics Consensus: Trashy and melodramatic, The Paperboy is enlivened by a strong cast and a steamy, sordid plot, but it's uneven and often veers into camp.

Critics Consensus: Trashy and melodramatic, The Paperboy is enlivened by a strong cast and a steamy, sordid plot, but it's uneven and often veers into camp.

Critic Consensus: Trashy and melodramatic, The Paperboy is enlivened by a strong cast and a steamy, sordid plot, but it's uneven and often veers into camp.

Rahsaana Ison
as Lady in Bar

John Thompson
as Interviewer
View All

News & Interviews for The Paperboy

View All The Paperboy News

Critic Reviews for The Paperboy

If you like that freaky, perverted feeling of spying on an even bigger freak show, you will find this film both fascinating and horrible to watch.

Daniels turns out to be the ideal director for a film about the tendency of desire to turn sane minds to guacamole.

The Paperboy is not all bad, but it isn't all good either. I'm not quite sure what Daniels wanted his audience to walk away with.

I'll just get it out of the way now: The Paperboy is unbelievably awful.

Set in the late 1960s, the movie is tactless, shameless and almost proudly seedy. Nevertheless, it is always highly watchable, prone to truly fascinate an audience as it also genuinely appalls them.

Whether you want to see it or not is more or less the same the decision as whether you want to go to Florida itself. You probably do, even if you don't care to admit it. Like the state itself, it's just so much trashy fun.

Efron's performance alone is worth taking a chance on Daniels' otherwise patchy picture.

Ultimately, The Paperboy is to be enjoyed for its ultra-camp performances, so delightfully hammy and over the top that they swiftly become mesmeric.

There's something undeniably compelling about the cast's daringly go-for-broke performances... but Daniels fragments the narrative and throws in so many tricksy directorial touches that the whole thing becomes an annoyingly indulgent mess.

Audience Reviews for The Paperboy

It looks and feels like something made in the 1970s but with a sordid quality that makes it so absurdly hilarious in all its filthy nonsense - thanks also to a terrific performance by Nicole Kidman as the trashy Southern blonde, who steals every scene she appears in.

Almost X rated - lots of graphic sex and violence. This is a very dark film, with people making terrible, tragic choices. Cusak, and McConaughey, were excellent....but, even great acting couldn't make all the ugliness worthwhile for me, or save a pointless script.

Set in the Jim Crow south during the civil rights movement, this lurid melodrama follows a college dropout as he helps his journalist brother investigate the case of a man who may have been wrongfully imprisoned; a strange love triangle heats up when he falls for the accused's nymphomaniacal death-row-groupie fiancee. The word "trashy" was invented for stories like this; it's as much fun as a stolen hump in the backseat of a 1965 Chevy Impala.

The movie begins on a promising note. I felt like it'd be a good thriller drama about a newspaper family conducting an investigation whether a convict on a death row deserves it. But it doesn't take long for the drama and thrills to fall into the contemporaries. The performances are excellent, though. Otherwise, just another movie based on a novel. I now understand why it's rated 6 on IMDb. * Make do with the linguistic mistakes. I MAY rewrite it properly in leisure.