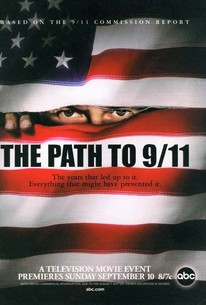 This five-hour ABC miniseries depicts the events leading up to the terrorist attacks of September 11, 2001, through the scope of a handful of intelligence and counter-terrorism officials in the U.S. government. Harvey Keitel plays John O'Neill, the counter-terrorism chief of the FBI whose belief that Osama bin Laden was planning assaults on U.S. soil fell on deaf ears and failed to gain the traction necessary to stop the events. In a tragic twist, O'Neill later went to work at the World Trade Center and was killed on that fateful day. Also starring Donnie Wahlberg and Stephen Root, The Path to 9/11 garnered controversy for its questionable depiction of the Clinton administration's failings related to the threat.

Critic Reviews for The Path to 9/11

There are no critic reviews yet for The Path to 9/11. Keep checking Rotten Tomatoes for updates!

There are no featured reviews for The Path to 9/11 at this time.