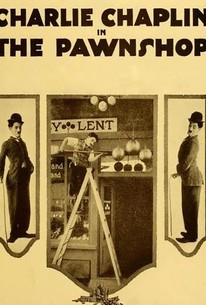 Charlie Chaplin's sixth film for the Mutual Film Corporation is a marvel of sight gags, comic transformations and brilliant pantomime. Charlie plays an assistant in a pawnshop, where he arrives late for work and is scolded by the portly Pawnbroker, played by Henry Bergman in his first role in a Chaplin film. Bergman was to go on to play in most of the Chaplin films through Modern Times, also filling the roles of Assistant Director, gagman and confidant. Charlie annoys his rival employee (John Rand) with his dusting and a series of conflicts between them arise. They must go outside and clean the store front, and Charlie, trapping Rand between the rungs of a ladder, performs a ballet-like boxing scene, striking his helpless opponent until a cop arrives on the scene, whereupon Charlie's movements become the most graceful of dances. Back inside the shop, their fight escalates until the Pawnbroker enters and angrily discharges Charlie. The little fellow's heart-breaking pleas for forgiveness, during which he mimes that he has many children ranging in height from about two to seven feet, cause the boss to relent. Alone again, Charlie renews his attack on Rand with vigor, but just as he's about to deliver the coup de grace, Edna Purviance, the boss' daughter, enters from the back room curious as to the commotion. Charlie swiftly lays down on the floor and Edna scolds the near-unconscious Rand for striking "a mere child," patting Charlie's cheek as he admires her figure. She takes him into the kitchen and gives him a doughnut, which Chaplin's wonderful pantomime ability makes us believe weighs 20 pounds, as he exercises with it as if it were a dumbbell. When Rand enters, the fight resumes, but hearing the racket the boss comes in and Charlie quickly resumes his role as baker then goes to the safe to retrieve his lunch. Manning the shop Charlie encounters three customers, the first an old actor wanting to pawn his late wife's ring for five dollars. His histrionics touch Charlie deeply. He gives the bereaved man 10 dollars from the till and the ring back as well. When the man offers to gives Charlie change and pulls out huge wad of bills, Charlie knows he's been had. Meanwhile, another customer arrives wishing to pawn an alarm clock. In a long, brilliant scene of comic transformations, better seen than described, Charlie becomes surgeon, jeweller, ribbon clerk and mechanic as he dismantles and destroys the clock to the total amazement of the customer, Albert Austin. Gathering the detritus of the ruined timepiece and sweeping them into Austin's derby, Charlie rejects the item, sending the protesting customer packing with a blow from a rubber hammer. His next customer is a lady with a bowl of goldfish, which Charlie tests for authenticity by pouring muriatic acid (the famous "acid test") into the bowl. The boss emerges and he sends the lady away. Meanwhile Charlie and Rand are at it again, and a flying wad of dough catches both boss and crook in the face. The boss chases Charlie from the kitchen, whereupon Charlie hides in a trunk to avoid punishment. Just then the crook emerges from the safe, gun drawn, stolen diamonds under his arm and holds the others at bay. Charlie heroically emerges from the trunk, and in balletic movements, smashes the crook over the head, embraces Edna, receives a pat on the back from the boss and delivers one final back kick to his rival.

Edna Purviance
as His Daughter

Albert Austin
as Client with Clock

Wesley Ruggles
as Client with Ring

Critic Reviews for The Pawnshop

There are no critic reviews yet for The Pawnshop. Keep checking Rotten Tomatoes for updates!

Audience Reviews for The Pawnshop

The clock-repair scene is hilarious but, otherwise, the slapstick punches and ladder gags seem like tired cliches now. Oh no, and here comes the stern but hapless street cop....

Charlie Chaplin offered a series of comic essays on the trades and professions; he presented a fantastic gallery of the skilled and unskilled in a few minutes of this silent comedy film. When a man brought in an alarm clock and Charlie accepted it. Examined it he became, successively, a heart specialist, a doctor, a specialist in antiques, a driller, a housewife, a dentist, a plumber, a jeweller, a ribbon clerk, and a cook. It was one of the greatest scenes Chaplin ever made.