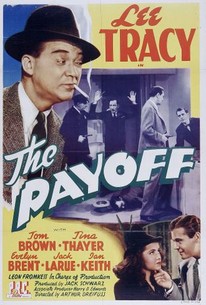 Lee Tracy once more plays a fast-talking, slightly amoral newspaper reporter in PRC's The Payoff. Tracy is cast as Brad McKay, who at present is investigating the murder of a special prosecutor. The dead man was on the verge of delivering damning evidence against racket boss John Angus (Jack LaRue), and it looks as though the killing was an "inside job", committed by one of the victim's associates. Aiding and abetting McKay are cub reporter Guy Morris (Tom Brown), the publisher's son; Phyllis Walker (Tina Thayer), daughter of the murdered man; and Alma Dorene (Evelyn Brent), a femme fatale who is Not What She Seems. Way, way down on the cast list is Pat Costello, the brother of comedian Lou Costello.

Critic Reviews for The Payoff

It results in an unconvincing twisty ending to a film that ran out of gas long before the ending.

Audience Reviews for The Payoff

A short black ^ white film, about a lawye getting killed by a small town mob boss and a reporter breaking the case and the story. Some excellent one liners that bring laughter to the movie. A good ole black and White 2 1/2 stars